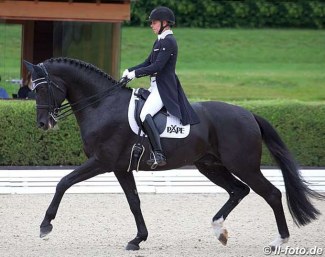 The 7-year old Hanoverian licensed stallion Libertad has been sold as a sport horse to a German dressage rider based in Hamburg.

Libertad is by Londontime out of Shelbyville (by San Remo x Wolkentanz I x Lavauzelle AA) and bred by Mona Diekmeier.

Owned by Ingo Pape, the black was licensed at the 2014 Hanoverian Stallion Licensing in Verden and did his 50-day stallion performance test in Schlieckau in 2016. He scored a winning total of 9.03 points.

In 2017 Libertad became the recipient of the Weltmeyer Prize, sharing it with Emilio Sanchez for being the Hanoverian licensed stallions, which passed their performance tests last year with the best results of their age-groups.

Libertad's competition career started fairly late. He was first shown in 2018 by Susan Pape at the local show in Bulkau and qualified for the 2018 Bundeschampionate where he was 16th in the finals for the 6-year olds.

In 2019 he competed at just three shows in the Developing Prix St Georges horse classes. He achieved a double victory at his last show under Pape in August 2019 at the CDN Wingst-Dobrock.

Libertad will no longer stand up for stud but has been sold as a sport horse.