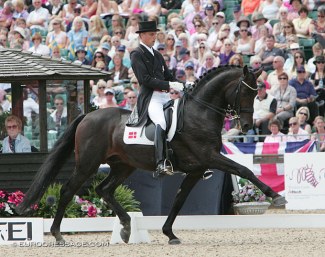 St. Georg reported that the stallion collapsed and died in his paddock during daily turn-out. He was 22 years old.

Carabas was a 1998 born Holsteiner stallion by Carnaby out of Abony Star (by Roberto x Mahmud x Manometer xx). He was bred by Ernst Daufeldt.

The colt became the champion of the 2000 Holsteiner Stallion Licensing in Neumunster and went on to be a high scorer at the 30-day Stallion Performance Test in Warendorf in 2001 (9.05 for dressage, 9.12 for show jumping). At the 70-day testing in Adelheidsdorf, he scored 133 for dressage and only 90 for show jumping, ranking him 7th with 118 points out of 38 participating stallions.

At age 7 the stallion was competed at international small tour level and in 2006 he placed fifth at the Nurnberger Burgpokal Finals.

Carabas was bought by Helgstrand's new sponsors, Lotte and Ole Vagner, for a rumoured 1.2 million euro as a horse to keep the rider's Grand Prix career going, post Blue Hors. The Vagners had also bought Bundeschampion stallion Laetare for 520,000 euro at the 2008 PSI Auction for Andreas ride

Andreas and Carabas competed at the CDI's in Wiesbaden, Rotterdam and Aachen and got selected to represent Denmark at the 2009 European Championships in Windsor, but they stranded on a 29th place in the Grand Prix Special.

In 2010 Jessica Schwiebert purchased Carabas for her husband Rainer to ride and the stallion moved to his forever home, Helenenhof in Germany.

Oliver Luze initially took on the ride again and they, for instance, showed at the CDI Hagen, the Hamburg Dressage Derby, the CDI Strassen and Verden in 2010.

In the autumn of 2010 Rainer Schwiebert took over the training and competing of Carabas. Their busiest year at international shows was in 2013 with starts in Bremen, Hamburg, Fritzens, Perl, and Kapellen. In 2014 there was only one international (Odense) and in 2015 he did two more (Neumunster, Hamburg).

Although Carabas did not breed that much, he has produced several successful offspring, 206 of them are registered for sport with the German Equestrian Federation; 22 of them reached S-level.