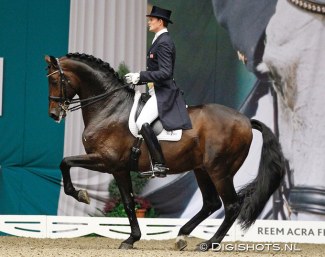 The Oldenburg breeding stallion and international Grand Prix horse, Blue Hors Romanov, has passed away in The Netherlands. He was 20 years old.

Bred by Harli Seifert, Blue Hors Romanov is by Rohdiamant x Grundstein II x Akzent II and is one of six licensed full brothers out of elite mare Rumirell.

He was the reserve licensing champion at the 2002 Oldenburg stallion licensed and sold to Blue Hors stud.

The bay stallion was first competed by Andreas Helgstrand as a youngster and in 2009 Sune Hansen took over the ride and brought the horse to FEI level. They represented Denmark at the 2011 European Dressage Championships in Rotterdam.

At the end of 2011 Blue Hors made the surprising decision to move their popular breeding stallion out of the country and relocate it in The Netherlands with Edward Gal as his 2012 Olympic hopeful. They did four big shows in 2012: CDI-W 's Hertogenbosch, CDI Munich CDI Rotterdam, the Dutch Championships in Hoofddorp and CDI-W Odense, but were not selected on the team.

Still, at the beginning of 2013 the stallion sold to Gaston Glock as the scores of the horse kept rising. Gal did one more show, the CDI Amsterdam after which the stallion was given to Hans Peter Minderhoud.

Minderhoud and Romanov competed in 2013 in Villach, Arnheim, and Aachen and represented The Netherlands at the 2013 European Championships in Herning, where they were 13th in the Special. That year they also did the World Cup qualifiers in Odense, Stockholm and London. Minderhoud showed him through 2014 but in 2015 they slowed down with just two shows at the end of the year.

Romanov did his last CDI in Drachten in January 2016 and then the horse quietly disappeared from the scene. The highly popular breeding stallion was never officially retired from sport.  Romanov's breeding career ended in 2019 when he was pulled from stud duties.

He was proclaimed elite stallion in 2009 and Danish Stallion of the Year in 2011.


“Our Romanov was being treated due to the Cushing Syndrome by specialists,” said Glock. “Unfortunately he became ever worse, with the consequence that today, on the advice of the veterinarians in attendance, we let him go over the rainbow bridge in order to spare him extended suffering.”