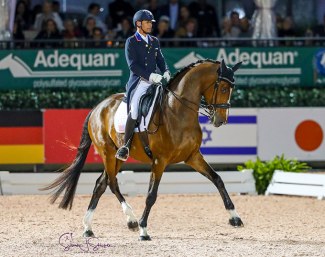 It was the second last to go who captured the imagination of judges and the crowd alike in the Grand Prix Freestyle at the 2020 CDI-W Wellington on Friday 7 February 2020. Steffen Peters (USA) and the 18.2hh Suppenkasper showed a jaw-dropping degree of difficulty in their winning test — including a canter pirouette into piaffe into walk — to claim the winner’s cooler with a new personal best of 83.495%.

In cool conditions but under clear skies, 15 combinations battled it out in week five’s showcase class under lights. Steffen and Suppenkasper took their sixth victory out of six starts in the three internationals they have competed in in Wellington since the start of the 2020 show season, posting best scores in the past two CDI-W's. Peters' previous freestyle best score was 80.99%, awarded in California in April 2019.

Of his test on the 18.2hh son of Spielberg, Peters said: “It felt wonderful. I knew when the music started and he was still walking — usually we’re piaffing and passaging with one hind leg going to the moon — from then on I knew there was a very good chance that he would just stand still. From there he was right with the music the entire time.

“This is one of those freestyles that I’ve visualized for many days — many mornings, many nights, throughout dark times — and it worked out beautifully,” added the 55-year-old, whose result qualified him for the FEI World Cup™ Final in Las Vegas in April. “There were a few tears that I wiped away. I kept telling Mopsie, ‘It looks like we’re going to Vegas.’ I told him that a bunch of times, but I think I was a bit more excited about it than he was. The bottom line is that it’s a huge accomplishment and something we dreamed of every single day. It’s hard to describe what that feels like when you go through a difficult time and your horse is so therapeutic.

Peters rode to a new soundtrack and floorplan, but the canter music is that same as he used for Ravel, on whom he won the FEI World Cup™ Final in 2009. He will remain in Wellington and contest the CDI5* in week seven (February 19-23) and the Nations Cup show in week 10 (10-15 March) before returning home to California.

He added: “There were difficult movements tonight, but the relaxation of this horse was tremendous. It is always an amazing pleasure to ride here. It was eight years ago today at the World Dressage Masters that I won in Wellington. I’ve never won the freestyle here and the experience was amazing. I was excited to go back on the long side [after the test] to shake a few hands, and that felt really good. There are only so many of us, but there were hundreds of spectators and they made it happen. We’re only a small part of it, and it felt good to give a little bit back to them.”

Second-placed Olivia LaGoy-Weltz was delighted to pull off another fault-free freestyle (video click here) with her long-time partner Lonoir, a 16-year-old gelding by De Noir, after having topped the freestyle in week three with over 80%.

“I was super happy with him,” said the Vermont-based rider. “In the warm-up and in the ring he was super. For the horse’s size, there are a lot of things that come one right after the other in that [test], and he handled it super well.

“There’s always room for improvement, and we’ve got our eye on Vegas as well. This is only the second time we’ve shown [this freestyle] and the fourth, maybe fifth time we’ve ridden through it. We’ll keep making it better,” added LaGoy-Weltz, who is gunning for a place on the U.S. team for the Tokyo Olympic Games this summer.

Third-placed Agnete Kirk Thinggaard was delighted with the 11-year-old Blue Hors Zatchmo’s performance, saying: “I knew I was going right after Steffen and the audience would probably do some clapping, and that’s okay, but he gets a bit tense, so I was aiming for a quiet, calm horse. He was really good and calm all the way through. I love this horse; he has so much quality and so much power, and he has so many gears left. We are just starting and this was our very first freestyle. I’ve only ridden through it once at home. I’m very proud of him.”

Canadian Lee Tubman, praised the standard of the class: “This evening you saw the top scores that you’re going to see in North America,” he said. “It’s a pleasure to judge it. There was a high degree of difficulty in so many of the freestyles and the choreography was quite complicated. The big payoff is when the execution comes off technically clean. That’s big points and that’s what we like to give people.” ﻿

There were a whopping 28 starters in the Grand Prix CDI3*. U.S. riders captured the top two spots, with Ashley Holzer — who formerly rode for Canada and switched nationalities three years ago — emerging as the unanimous winner from the five judges, garnering 72.761%. The four-time Olympic rider was making her debut international appearance — at any level — on Diane Fellows’ 11-year-old gelding Eastwood, who had not competed in a CDI for four years (video click here).

He was formerly shown in the young horse CDI divisions by Spanish Jordi Domingo Coll, which is where the Mango prefix comes from, referring to the horse's owner and Domingo's sponsor at the time, Spanish fashion giant Mango.  The horse has been trained out of the spotlight for the past two years by Holzer, who hopes to campaign the “incredibly powerful and a little spicy” gelding for a Tokyo Olympic place.

The 56-year-old rode the son of Wynton in his first ever grand prix, a national class, three weeks ago at the Global Dressage Festival, which they won with 75%, a foreshadowing of what was to come in this CDI class for this talented horse.

Nick Wagman rode another Dutch gelding, Don John, into second place. Beverly Gepfer’s 12-year-old gelding by Johnson scored 70.587%, with Canada’s Jill Irving and Degas 12 nipping at their heels with 70.348% to finish in third place from the last draw in this four-hour long class.

In the Intermediate I 3* class, Danish rider Carina Nevermann Torup continued her winning streak from the previous day with Korean rider Dong Seon Kim’s eight-year-old Bordeaux gelding Bordolino 8. The new pairing once again posted a plus-70% score, finishing on 70.049%, just ahead of the USA’s Yvonne De Haan and Winter.