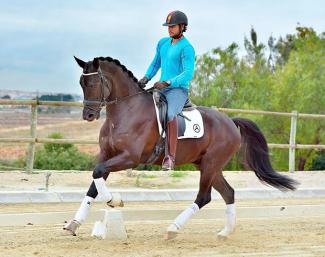 Eastwood is bred by Madeleine Witte-Vrees and is by Wynton out of Bambina (by Sandro Hit). He was presented at the preselection for the 2012 KWPN Stallion Licensing but not accepted.

Under Spanish Jordi Domingo, the liver chestnut Eastwood became the winner of the 5-year old division at the 2014 Spanish Young Horse Championships.

Between 2015 and 2016 Domingo rode Eastwood in several international young horse classes in Oliva Nova, Madrid and Mallorca. The horse's last international was the CDI Mallorca in October 2016 where he finished fourth in the 7-year old division. At the 2016 Spanish Young Horse Championships the gelding was 7th in the 7-year old division.  In June 2017 Domingo made his national Grand Prix debut on Eastwood.

Eastwood was owned by Turkish born and Spanish based Andic Ermay Nahman, who is shareholder in his brother's company Mango, a Spanish multi-billion fashion multinational. Andic is also a PRE breeder and has been a loyal sponsor of Domingo for years.

Eastwood has arrived in Wellington, Florida, where Fellows' Canadian born American Grand Prix trainer Ashely Holzer is based for the winter.