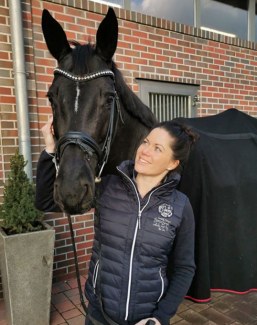 Sprehe's last competition, before her pregnancy break and birth of her daughter, was the CDI Frankfurt on Desperados in December 2018.

Back in the Ring with Destiny and Saphira Royal

Thirteen months later Kristina returned to the show ring with her number one Grand Prix horse, 11-year old Destiny (by Desperados x Sandro Hit x Argentinus), at the 2020 CDN Munster Indoor at the beginning of January.

Two weeks later Sprehe trailered Saphira Royal to Ankum to ride her in a Test of Choice (Grand Prix) class of which the results are unpublished. Her reported score was 71%

Saphira Royal is a 11-year old Rhinelander mare by San Amour out of Her Highness (by Monteverdi x Mackensen x Pasteur xx). She is bred by Herbert Werth.

In the spring of 2019, Sprehe got the ride on the mare from Russian horse investor Elena Knyaginicheva.

Saphira Royal was originally owned by Christine Bauer's Next Generation Dressage Horses. She was first competed by Lydia Camp, who finished fourth with her at the 2012 Bundeschampionate.  In 2012 Georg Etienne took over the ride for a few months, followed by Kira Wulferding climbed. She rode her to bronze at the 2013 Bundeschampionate.

In 2016 the mare sold to Johann Hinnemann and Wolf went on to represent Germany at the 2016 World Young Horse Championships in Ermelo, where they won bronze medal. Between 2017 and 2018 Wolf rode her at four internationals at small tour level and in that period Hinnemann sold Saphira Royal to Russian Elena Knyaginicheva.

Saphira Royal was purchased in the spring of 2019 and stayed in training with German team trainer Monica Theodorescu as Kristina was pregnant with her first child. Daughter Mila was born on 28 August 2019.