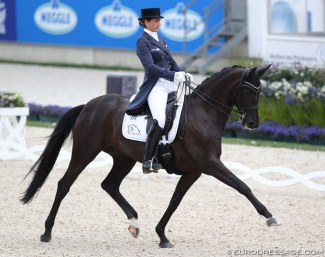 Saphira Royal is a 10-year old Rhinelander mare by San Amour out of Her Highness (by Monteverdi x Mackensen x Pasteur xx). She is bred by Herbert Werth.

Owned originally by Christine Bauer's Next Generation Dressage Horses, the black mare began her competition career as a 3-year old under Lydia Camp, who finished fourth with her at the 2012 Bundeschampionate.  In 2012 Georg Etienne took over the ride for a few months, after which Kira Wulferding climbed on board and rode her to bronze at the 2013 Bundeschampionate. Kira competed her through 2014 and landed fifth place at the 2014 Bundeschampionate for 5-year olds.

Saphira Royal got a new rider in 2015: Stefanie Wolf. She rode her to a 4th place at the  2015 Bundeschampionate and took her to S-level in 2016. In 2016 the mare sold to Johann Hinnemann and Wolf went on to represent Germany at the 2016 World Young Horse Championships in Ermelo and scored the bronze medal.

Between 2017 and 2018 Wolf rode the mare at four internationals at small tour level: the CDI in Ermelo, Hagen, Munich and Aachen. In that period Hinnemann sold Saphira Royal to Russian dressage horse investor Elena Knyaginicheva. The CDI Aachen in July 2018 was Wolf's last show on the mare.

Saphira Royal has now become a future Grand prix ride for Kristina Bröring-Sprehe, who is on a break from competitive riding as she is pregnant with her first child.