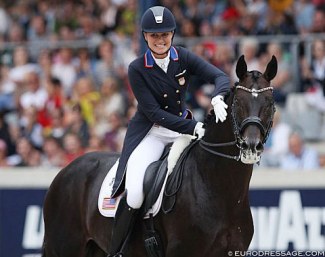 The US Equestrian has announced its Grand Prix dressage squads, which they call the "U.S. Dressage Elite and Pre-Elite Lists" for 2020.

The Elite Program was established to provide support and resources to athlete/horse combinations that have proven they are internationally competitive. Membership is reviewed twice annually and new members may be added on a rolling basis.

“We have a very exciting year ahead of us and I’m looking forward to continuing to work with each of the Elite and Pre-Elite list combinations to further strengthen the depth of our program. It will be a busy few months and I expect we will also see some new combinations make the jump to the Elite and Pre-Elite lists, which is very promising when looking at the future talent we can continue to develop within our program,” said Chef d’Equipe Debbie McDonald.

Selected on the Grand Prix A-squad, which the USEF calls the "Elite Program" are:

Selected on the Grand Prix B-squad, which the USEF calls the "Pre-Elite Program" are:

The Dressage Pre-Elite List underpins the Elite Program and seeks to provide support and guidance to those combinations in the 69-73% Grand Prix score range so they are able to succeed in reaching Elite Member status (consistent 73%+ score range).

Three well known American Grand Prix combinations have been dropped from the 2020 squads.

The retirement of Laura Graves' Verdades at the beginning of January have automatically ruled them out from the programme.

Katherine Bateson-Chandler (and Alcazar were in 2019 Pre-Elite members but have been promoted to the Elite List for 2020.

Remarkably, Lagoy’s Danish gelding Lonoir is still on the list as the horse has not done a CDI in a year and a half. His last show was Aachen 2018.