Where are They Now? Brentina 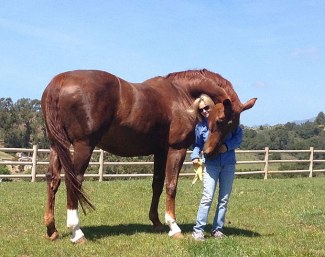 Debbie McDonald and Brentina were one of America's most successful dressage pairs in history. Since 2009 the mare has been retired from sport. The rising 29-year old mare is still alive and kicking and enjoying the California sunshine.

Writing History for the U.S.A.

Brentina is a Hanoverian mare by Brentano II out of a Lungau dam. She is bred by Wilhelm Rethorst from Badbergen, Germany.

Brentina was discovered at the Hanoverian Elite Auction in Verden by American Perry Thomas, who purchased her for 150,000 Deutsch Marks (75,000 euro). She moved to River Grove Farm, Idaho, USA, where Debbie McDonald began training her.

In 1999, Debbie and Brentina made their first claim to fame at the Pan American Games in Winnipeg, where they won individual and team gold.

They earned the United States its first World Cup Dressage Finals Champion's title in 2003 after Ulla Salzgeber was eliminated for doping use.

They represented the United States at the 2002 World Equestrian Games in Jerez de la Frontera, where they were fourth individually and made an impressive blow to the establishment as first time that Americans came so close to a podium place after 8 years. The next year the mare was turned into a Breyer model horse to celebrate her success. At the 2006 World Equestrian Games they were 32nd in the Grand Prix, but won team bronze. The mare was withdrawn from further competition at that WEG.

In February 2009 she underwent colic surgery in California, two months before her official retirement ceremony at the 2009 World Cup Finals in Las Vegas.

Brentina was retired from sport in 2009.

In 2010 two embryotransfer foals were born from Brentina at Pollyrich Farms in California: colt Dillinger (by Damsey) and colt Brighton (by Kingston). Dillinger ended up being trained by Adrienne Lyle, while Brighton stayed in California to be with Button Baker.

In 2011 Brentina was bred twice to Totilas with frozen semen, but both embryo transfers (ET) failed to take.

In August 2013 she had a second colic surgery at an equine clinic in Idaho. at age 22 but recovered well from it. She returned to California for the rest of her retirement.

In a recent interview with Jan Westmark for Sidelines Magazine, Debbie McDonald talks about how well Brentina is doing:

"She will be 30 (sic 29) this coming year and is doing very well," said McDonald. "She is still at In The Irons Farm in Santa Barbara, California, and will remain there for the rest of her life. I couldn’t have found a better place for her to be. I was very picky about where she went because she has had two colic surgeries. She needed to go someplace where they had eyes on her all the time. They know her so well that if she even seems at all off her feed the vet is called. She goes out in a pasture for a few hours every day and then into a stall with a run the rest of the time. I owe her longevity to Christi Sulzbach, her daughter Kate and all the staff. If it weren’t for them, I would be worried all the time and a mental mess. I love that they love her and will do everything in her best interest. Hard to find, but I did!"