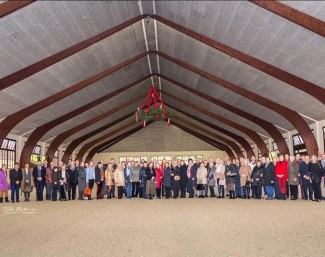 Guest columnist of this week is Hans-Christian Matthiesen, Danish 5* judge and president of the International Dressage Officials Club (IDOC). The IDOC held its General Assembly at Gestut Schafhof in Kronberg, Germany, during the 2019 CDI Frankfurt on 19 - 22 December 2019.

His end-of-the-year message to the IDOC members is our guest column of the week.

Another year has gone by – and as always, it is time to reflect. Our sport is developing and like previous years it gets a lot of attention. One of the things that I have learned, and I believe I mentioned it last year too, is that most officials are deeply involved, not only in the international sport but also on a national level. Most of you are involved in education and training of other officials. You are members of boards and committees and work hard to promote and develop our sport. Your dedication and activity gives us a clear advantage in the political “field of play”. That is the kind of thorough work, that will make us respected by riders, trainers, colleagues and also FEI and other communities.

Some of the activities including meetings and “work behind the scenes” included representation at the 5* dressage judges meeting in Moscow – that included a lot of information about the Code of Points; later on in March we were represented at the Stakeholder meeting in Lausanne, a meeting with the dressage committee, the FEI HQ, IDRC, AIDEO and IDTC. One of the positive things from this meeting was the will to expand the cooperation between IDOC and the other stakeholder clubs: IDTC, IDRC and AIDEO.

In Warendorf, GER, FEI invited IDOC to join a test-event for new dressage tests and discussions on how to judge them. It was another fruitful meeting and with good, positive outcome. At the end of the year, in November, IDOC was represented at the FEI GA in Moscow, mostly for lobbying and meetings with other stakeholders and EEF.

For the 3rd time IDOC supported further education for the judges in the Pacific region, this year at the CDI in Hartpury, UK (Hagen 2015, Aachen 2017). I am happy to tell, that we are working on the next one already. Parallel with the meetings IDOC has been involved in Education for stewards and judges. Elisabeth (Williams) and Jacques (Van Daele) has been active in the Steward program, and I have been part of the Education Working group together with Maribel Alonso, Stephen Clarke and Katrina Wüst.

Time flies, rules changes, they come and they go. A very controversial rule about age no longer exists. Let there be no doubt that IDOC has worked hard for equal and better terms for all officials, and still do. But with the no longer existing Age-rule we are more than ever committed to promote new and upcoming candidates. We have to be updated on all fronts and live up to what ever Code of conduct your area is subject to.

In the future we will have many colleagues with many years of experience ! Use them, but at the same time it is crucial that you leave an openspot for the younger, not so experienced, officials. We have to give and create more positions to new officials at shows, competitions, on panels, in working groups and so on.

Life long experience can help you in many or most difficult situations. In situations that leads to conflicts, where the rules might not be clear or easy to understand it is obvious to ask a more experienced colleague and act on their knowledge.

The proposal and drafting of rules are in principle in our hands (as stakeholder group), but it certainly doesn’t always feel like that. That is why we must work together. If we want to have more influence and bigger footprint, we must act united.

New ideas and changes are welcome, even if they sometimes seem illogical or even wrong at first. Online testing and exams will be a part of the future. For some it will easy, maybe because they are used to the format from school or work, for others it will be a challenge and demand more attention. CES or Complement Evaluation System is a good example. To a certain extend it will replace the no longer existing, before mentioned, retirement-rule, but it can not stand alone. We have so many aspects in our sport, that doesn’t only depend on knowledge of rules, but also logic and situational sense.

Our already existing education system includes in-person meetings and seminars with and without exams. These meetings guarantee a thorough and effective education. No online, multiple choice exam will replace that. CES as a test method can release resources to focus on other important issues. It will be up to the FEI, Educations working groups and other implemented groups to develop a system, that will incorporate all officials and give them inspiration to do their job. The refresher seminars are valuable and important for all officials.

The ongoing education and training is a lifelong process, that besides information should keep us inspired to keep going as an official. An almost lifelong experience might help you in most cases, positive events, but also more difficult and challenging episodes and incidents. The sport in itself is a very conservative sport, on the outside. But on the inside it is changing. Mostly for the good. The level and spread all over the world are expanding like rings in the water, all over the world. At the same time, the focus on the sport has become increasingly polarized. Even the hard core dressage fans are becoming more polarized. What used to be accepted before, eg trainings methods, handling and presenting of the horses can quickly become the subject of criticism. It only requires a less flattering image on the internet – and suddenly everybody has an opinion.

I am happy that IDOC have supported several seminars financial and will continue to do so in the future. We are open to ideas and new initiatives, please let us know and include us in your work.

I have a clear vision for IDOC. I want IDOC to be the best and strongest in the further development and training of officials. We should, either alone or together with other parties, offer many different types of education and training sessions. We should widen our base in Europe to include the whole world, and offer “hotspots” seminars and in-person meetings to help the officials meet their education and activity requirements. We have a good cooperation with the FEI when it comes to helping officials with problems whether its lack of activity, eg not getting enough invitations or other problems.

My vision also includes the national officials. We should extend our program to offer more opportunities and work together with national federations. The national officials should in time have their own platform within the IDOC, to secure the high level and realignment of education and the direct inclusion into the international programme. At the same time we need to protect IDOCs position as a stakeholder group for international officials within the FEI.I know from experience, that all of you work hard to prevent the sport from becoming a target for unwarranted criticism, but we most be prepared – at all times and levels.

A new technological age should help us into the future, but at the same time we need to protect the horse and respect the people behind the scenes – and that includes all the hardworking officials.