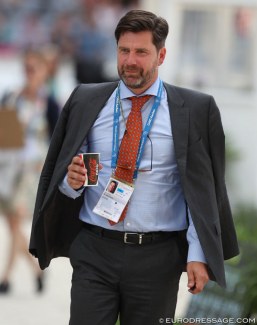 Danish 5* judge Hans-Christian Matthiesen is president of the International Dressage Officials Club and for the new year he wrote an open letter  with his reflections on 2017. He also looks forward to an exciting 2018 with the World Equestrian Games as year highlight competition.

2017 has been a very exciting year on many levels. We just had our general assembly in Geneva in the beginning of December, and it feels good to be back on track with the annual meetings. Once again thank you to the FEI and Swiss Federation for helping out. The board is ready, and now we just need the help and backup from our members to “step up our game”.

As many of you have realized, I have my own way of doing things : I like the discussion to be open and I like to engage as many people as possible. One thing that became very clear to me during the discussions and meetings this year was the passion and engagement of all the officials. You are deeply involved, not only on international level, but also on national level. You are involved in almost everything, ranging from board meetings to lower levels education of officials etc.All that of course next to your job and everyday life. We are all very involved people, and the fact that we have achieved a lot this year comes from that engagement.

The board has a lot of ideas and plans, but it is still essential for the future of IDOC that you, the members, keep us up to date with problematic areas that will need our attention. Ideas are always very welcome.Please don’t hesitate to contact me or your regional representative if you have any questions or ideas.

Let’s take a moment to reflect on 2017. The year started after the IDOC General assembly in Amsterdam with a stakeholders’ meeting where new ideas were introduced, including the Code of Points. After several meetings with the other stakeholders and groups, we attended the Sports Forum in Lausanne. Also here the Dressage Judging working group presented Code of Points, HiLo drop etc. Despite our extensive feedback and a rather unanimous negative feedback from almost all the federations, the FEI decided to bring a proposal forward to the FEI General Assembly.

At the Sports Forum we also followed the interesting ideas from the Officials working group, which included the preliminary discussions aboutthe removal of the Age-limit for Officials.

At the FEI general assembly in Montevideo in autumn 2017, we were focused on the HiLo part, which was finally put on hold pending evaluation to be conducted in 2018. The removal of the collective marks was however approved. The chairman of the Dressage Committee explained in an email thatit was the result of a democratic process, and it was indeed.

The Dressage Committee itself was not unanimous when it initially decided to endorsethe recommendations of the working group, which were then sent to the National Federations and Stakeholders for review. The response from most Federations was negative; IDOC, supported by many top riders, vigorously opposed the proposals, as did the trainers and organizers clubs. And yet, the Dressage Committee was unfazed and moved on with the proposals. This is where one may wonder whether or not this is a truly democratic process. It goes beyond the voting process itself ; it is the wish to be heard, understood, and taken seriously. That is atleast as important as the voting process. And this is where I think FEI can do better. When it comes to judging/official matters, then start with the officials : it is their job and responsibility. Not the riders or trainers. We, the Officials, have to deal and live with the systems, effective, fair, brilliant or not.

”Respect” between riders, trainers and officials were also among the ”hot” topics last year. It is essential for all officials that we respect not only each other but also other involved parties in the sport. Many officials have the feeling, that different official groups are no longer respected like in the past. That we have to work on. We know we have to earn respect, not only by hard work and sacrifice but also from what comes with the ”job”.

In 2018, work will continue on the Code of points and trials for the different fail-safe such as HiLo and the 5 or 6% rule will be carried out. An evaluation of the Education system will also be conducted, which is very important for IDOC. We cannot accept any system or change unless it has been properly tested.

In IDOC we will start developing a new strategy for the Stewards (Elisabeth Williams) and also introduce a stronger correlation between IDOC and para-judges/officials (Working group).

Our Facebook page has been very busy and popular. It’s a great way to stay connected. But not everyone is on Facebook, that’s why it is very important that you contact us, if you have any questions or feedback.

”Inclusion and respect” will be the keywords for 2018. Help us to stay focused and put the Officials back on the map !