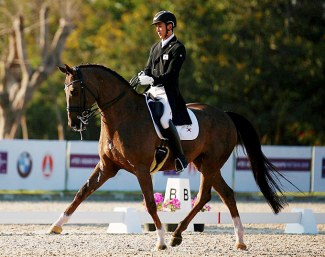 The organizers appointed Oliver Hoberg, Footing Specialist for Tokyo 2020, to build brand new competition and warm-up arenas as well as to upgrade all existing training surfaces.

Furthermore to facilitate the maximum participation of teams, the Organising Committee, headed by Dr. Harald Link and Khun Nunthinee Tanner,  chartered a US$1,000,000 flight to bring participating horses based in Europe free of charge into Thailand and back!

Unfortunately despite all favorable conditions, the interest to compete at these Championships was lukewarm and just 13 riders from 6 different nations participated in the dressage championships, which were ridden at small tour level.

The week in Pattaya started in fine style for the hosts as they secured the first ever gold medal in the new FEI Asian Championships.

The team from Taiwan, with Vivian Chang, Chia-Hui Lai and Janise S.H.Lu, locked in on team silver with 192.500 points.

German based Dongheon Nam was the only rider representing South Korea at the Championships in Pattaya but he became the first-ever FEI Asia Championships individual champion when he took gold in the Dressage competition.

Nam, who had been the top-scorer in the team competition, finished first on his 15-year old Westfalian gelding First Edition (by Fiano x Dynast) with a score of 68.353% in the individual competition which was decided by the Intermediaire I.

Nam and First Edition completed the double when they added Individual Freestyle gold with an immense score of 73.919%.Nam is trained by German Yvonne Fiestelmann.

Thailand’s Pakjira Thongpakdi made it a second silver to add to Team gold with 70.663%.

Thai compatriot Arinadtha Chavatanont and the 12-year old Dutch warmblood Clapton C (by Jazz x San Remo) was just behind in third with  69.769%.