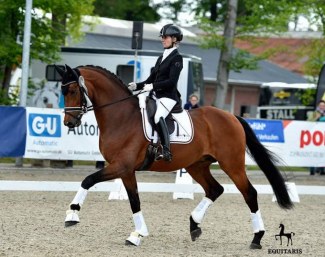 Dr. Ulf Möller, who is in charge of the stable in Wellington, selected prospects for 2020 based on his experience from the first two seasons.

"It is now the third time we’re traveling to the United States, and with the experience we’ve gained in the past seasons, the selection of the horses going to the USA has been easier this year," says Möller. "We mainly see a demand for horses who are a bit older; those which either compete at Grand Prix level or have started working on the exercises for it. The interest is less in the younger horses, which we are used to in Europe. The Americans go for the horses with whom they can start competing and be successful with, within a short period of time."

Before the selected horses can start their journey to Wellington, they must first be checked by an official veterinarian; blood samples need to be taken, and swap samples from the mares. When all is ok, they will leave Vodskov on 30 November 2019 and be driven to Guido Klatte in Lastrup, Germany. After 24 hours, they’ll go to Lufthansa in Frankfurt and fly to Miami. After arriving in Florida there will be a 2-day quarantine (for the mares it is a bit longer), after which they will be trailered to Helgstrand U.S.A. in Wellington.

"The horses we have selected for Wellington have very exciting pedigrees," Möller explained. "Some of them feature the biggest dressage horse producers in the world, such as Foundation, Sir Donnerhall and Skovens Rafael."

Aside from their impressive performance pedigrees, they have also achieved many great results.

"The collection includes horses that have participated in the Bundeschampionate, the World Breeding Championships for Young Horses in the Netherlands and horses, which are placed up to international Grand Prix level," Ulf added.

Carina is raised in a riding family, where her mother, Jette Nevermann, having been the Danish National Pony Team Trainer for several years. Carina has a long list of top placings, for instance gold-medals at the Nordic Championships, DEF Championships, and medals at the European Championships. Most recently she achieved a top placing in the Bundgaard Byg Cup at the Blue Hors dressage festival.

Madeleine also has a long career behind her with numerous top placings up to international Intermediaire I level. She can also draw on her many years of experience with youngsters. She has trained several horses that have participated in the prestigious Bundeschampionate in Warendorf, Germany, including several finalists.

The following 16 are going to Helgstrand Dressage USA: