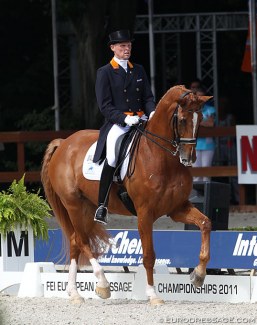 Moedwil was a Dutch warmblood gelding by Goodwill out of Harianne (by Beaujolais). He was bred by W. Scheepens.

Marijnissen received the gelding in training as a 4-year old, when he was owned by the Seignette family. He was originally intended for show jumping, but Sander developed his dressage talent.

He became the fourth horse which Sander trained from novice level to Grand Prix, after Dakota, Cibufa and Griffier.

The pair first competed at national Grand Prix level in 2007 and became Dutch reserve indoor champions. They made their international Grand Prix debut in 2008 at the CDIO Hickstead, winning the Grand Prix and Kur. In 2009 they actively competed with starts in Neumunster, Bremen, Dortmund, Saumur, Munich, Rotterdam and Aachen to get a spot on the Dutch team for the European Championships in Windsor but they were team reserves.

The tall gelding got injured at the beginning of 2010. Moedwil injured his hoof in the stall and needed five months rest. They returned at the CDI Oldenburg in November 2010.

Marijnissen and Moedwil had their year in 2011 and with improving scores in Amsterdam, Dortmund, Den Bosch, and Hickstead they were selected on the Dutch team for the 2011 European Championships in Rotterdam, where they earned team bronze and finished 17th in the Grand Prix Special.

Marijnissen's last international on Moedwil was the 2011 CDI Oldenburg. The horse was retired from competition sport that year.

"After a very long and successful horse life, we had to say goodbye to this great one," said Marijnissen. "You were my once-in-a-lifetime horse. You were an incredible horse in all regards. I can only look back on the beautiful moments we experienced together. Afterwards you enjoyed eight more years of your life."