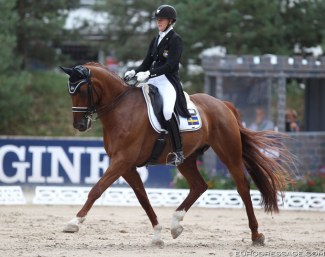 CSI is a 12-year old Dutch warmblood gelding by United out of Sfradin (by Gribaldi). He is bred by Rene Franssen.

The gelding was initially owned by Jonna Schelstraete in partnership with the breeder. He was first shown in 2013 as a 6-year old and in 2014 he moved up to small tour level.

Jonna and CSI made their international show debut at the CDI Maastricht in November 2014. In 2015 she competed him at the CDI's in Roosendaal and Stadl Paura after which he sold to Swedish young rider Sofie Andersson.

The new duo made a quick start and already came out at its first CDI in Odense two months later. They went on the ride at Ypaja that year. In 2017 Andersson gained steam on CSI and rode at shows in Sint-Truiden, Aalborg, Hammaro and was selected on the Swedish team for the 2017 European Young Riders Championships in Roosendaal, where they were 13th in the Kur to Music finals.

In 2018 Sofie and CDI rode in Aalborg and Uggerhalne which sufficed for reselection of the team for the 2018 Europeans, this time in Fontainebleau. They were 35th in the individual test. At the Swedish Young Riders Championships they won silver in 2017 and bronze in 2018.

CSI returned to Jonna Schelstraete in The Netherlands in the summer of 2018 and she rode him once at medium tour level once at the 2018 CDI Le Mans. CSI did not compete internationally in 2019.

Andersson quit riding entirely after the 2018 Euros to dedicate herself fully to her Law studies at Lund University. She also works at a law firm in Malmo. Her parents' equestrian yard in Sjobo is for sale.

German young rider Ida Niederdorf will now continue her career on the chestnut. Last year she rode the Hanoverian Dressman (by Don Bosco x Natiello xx), a horse she also took over from Sofie Andersson, at one international, the 2018 CDI Exloo, at junior level.

CSI arrived in her barn little over two weeks ago. Ida, who is trained by her mom and Sascha Böhnk, made her show debut with CSI at the CDN Verden last weekend and placed fourth twice in the Jugend Challenge.