The Freestyle: The Perfect Symbiosis of Horse, Rider and Music 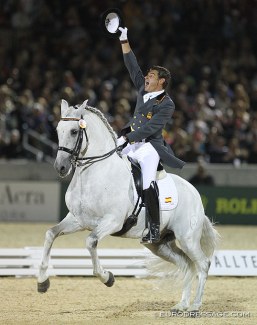 by Lily Forado - reproduced with kind permission of ANCCE

Throughout contemporary history, the development of music has been most surprising. Music has, and always will be, a reflection of memories. Music has been used to depict great historical feats, epic battles, times of prosperity, as well as eras of beauty and magnificence. when it comes to equestrian disciplines, specifically the equestrian ballet of dressage, many people are unaware of the origins of the great equestrian showpiece: the freestyle. The dressage world Cup is closely related with the history of the kür grand prix.

If we go baCk to the 1984 Los Angeles Olympic Games, Dutch visionary, Joep Bartels, was on hand at the awards ceremony when the German rider, Reiner Klimke, on Ahlerich, performed some one-time changes in time to the Olympic Anthem and in such a way that each stride fit perfectly with the tempo of the music.

It was that unique moment when the mind of Joep Bartel was illuminated; he decided to create a new test format for Dressage. In Holland a year later, specifically at ‘s-Hertogenbosch, the first World Cup competition included this musical test. In other words, it could be said that the 1985 World Cup in ‘s-Hertogenbosch put the Freestyle on the map. This wonderful initiative by Dutchman Joep Bartels denoted a turning point in the history of this equestrian discipline.

This quote by Joep Bartels appeared in 2016 November issue of The Horse Magazine: “I was inspired by the Awards Ceremony in Los Angeles when Reiner Klimke did his lap of honor with the reins in one hand, doing one-time changes which were perfectly synchronized with the Olympic Anthem. I saw the emotional reaction of the crowds and that inspired me. When I returned to Europe, I met with a sponsor, Nashua, and the following year, in 1985, I launched it in the World Cup series. I was almost killed by the press; they said that I had destroyed Dressage. There were also many riders who were not very keen, but Gabriela Grillo, a German rider, supported me through it all. It was in ‘s-Hertogenbosch that it really took off. It was a fantastic atmosphere.”

In Dressage, it is impressive to watch and feel how the melodies and tones adapt perfectly to the horses’ strides. To perform a good Kür, the music has to be chosen with great care; movements are carried out in keeping with the rhythm of the melody. In other words, horse and rider have to become one to hypnotize the audience with the music.

A great Freestyle captivates spectators; it takes their breath away; it evokes emotions that make their hair stand on end in such a way that when the movement performed by horse and rider harmonize as one.

There have been many glorious occasions throughout the history of the Freestyle. PRE horses Evento, Invasor, Fuego de Cárdenas and, recently, Grandioso, all played a key role with their Spanish melodies. There are always specific examples that are engraved on our minds, and these were a few of those renowned horses.

Evento opened the doors to a dream that crossed international borders. His excellent performance at the 1996 Atlanta Olympic Games brought the PRE to the world’s notice. At the hand of Ignacio Rambla, this son of Leviton was outstanding at the most important sporting event in the world.

That was the first Olympic Games to incorporate the musical test. In previous years, several German Dressage experts expressed their opposition; they saw it as the end of Dressage. Nevertheless, Ignacio Rambla danced with Evento to the sound of a guitar. The audience was astonished, not only by their incredible Piaffe-Passage transitions, but, above all, by their spectacular entrance in one-time changes. They ended up taking a well-deserved eleventh place. Their performance was a taste of the great yet-to-come moments. Once again, Purebred Spanish Horses expanded its horizons and became a part of the international elite.

Invasor, son of Panadero VII, was one of the most important PRE horses, in terms of Dressage, during the 1990s and at the onset of the 21st century. In the hands of the great rider, Rafael Soto, this pair entered an endless number of international arenas to display their art.

The 2002 WEG in Jerez was a major leap forward in terms of continuity, consideration and the promotion of the PRE at world level. The Spanish team included Beatriz Ferrer Salat riding Beauvalais, Juan Antonio Jiménez riding Guizo, Ignacio Rambla on Granadero (PRE) and Rafael Soto with Invasor (PRE). It was in Jerez, the cradle of equestrian art and the city of PRE horses, where the international riders danced to the sound of the music and the Spanish team came away with the team Bronze. That was a turning point for Dressage in Spain. It took place at the right time, in the right place: in Jerez. Rafael and Invasor performed a majestic test that became the precursor of another quintessential event: the Athens Olympic Games two years later.

If Athens is remembered for anything, in addition to its historic and artistic riches, it is for being the home of the first Olympic Games. In 2004, Athens hosted the summer Olympic Games where Spain gained a privileged place on the podium by winning a Silver Medal. Once the team and individual tests concluded, the music began.

Ignacio Rambla, riding the PRE Oleaje, continued in the footsteps of Evento. Later came the turn of Rafael Soto and Invasor, a pair who, to the sound of Spanish music by Michael Erdmann, established their legacy with one of their best-ever tests. Following a superb entrance in Passage, the movements flowed perfectly with the music. Rafael Soto performed one exercise after another with great precision; the combination of movements to the music was impressive. The complexity of the canter exercises was incredible; they performed a 20-meter half circle in extended canter doing one-time changed, followed by a pirouette in Piaffe. On completing the test, Rafael Soto doffed his hat in delight (hat in hand) and launched an art that was worthy of record.

The equation of the Freestyle combines the know-how of the rider with the elegance, beauty, strength and character of his horse. But in this combination, the key factor lies in the music.

The melody is created by music professionals: composers. One of these is the celebrated composer Michael Erdmann, who has worked, and still does, with top international riders like Isabell Werth, the current World number one.

The Freestyle music by Michael Erdmann has always been a highly emotional experience. His multiple creations include music for some of Spain’s most famous Freestyle riders, including Invasor ridden by Rafael Soto, Beatriz Ferrer Salat with Beauvalais and Juan Manuel Muñoz with Fuego de Cárdenas.

The Freestyle creation process comes from the collaboration with rider, horse and composer. Regarding this equation, Michael Erdmann explains in more detail how the process works: “Usually, the entire design and selection of musical themes is left up to me. Some riders have their own ideas about the music they would like to ride to. However, there is often a problem with the rider’s own perception. The rider often misinterprets the beat of the music and the rhythm of the horse. Riders like Isabell Werth have practically been giving me free rein for 24 years, and have implemented our productions in a sensational way. It is not for nothing that she often scores 10 for Music & Interpretation.”

When it comes to producing the composition, there are several elements that enter into play, as is well those described by Michael: “In my view, freestyle is a high-quality art form! The basis for this, of course, is the perfect technical implementation. This is supplemented by the horse and rider bringing the music alive through the horse’s movements, the dynamism of the choreography and the start and end of the sections. If this goes well, this whole package will please the public and judges alike.”

One of the historic Kürs of the first decade of the 21st Century was that of Juan Manuel Muñoz with Fuego de Cárdenas at the 2010 Kentucky WEG. Under an electric atmosphere, a sepulchral silence and the multitude of people who had come to watch the musical tests, Juan Manuel Muñoz took to the center line with the impressive Fuego de Cárdenas, as the final representative of the Spanish delegation. To the chords of very Spanish music, specifically, flamenco style, the pair danced to the rhythm of the snapping castanets and Spanish guitars. Every lover of equestrian ballet has viewed this test an infinite number of times. Every stride of Fuego de Cárdenas transported the Kentucky audience, which did not hesitate in their excitement. Whistles and shouts of triumph accompanied the Andalusian rider in each movement. The entire section involving Passage and Piaffe was exquisite, but the great finale of the night, and even of the competition, the great highlight, as the Americans would say, was when Juan Manuel Muñoz took to the center line in canter, performing one- time changes with only one hand on the reins. That exercise so delighted the spectators that it applause, shouts and ovations were launched towards the Spanish rider. Along the same lines, as the grand finale, Juan Manuel Muñoz undertook an extended canter, followed by a pirouette in Piaffe, a typical Spanish exercise which caused the public to explode with delight, in a memorable cacophony of shouts and applause. Juan Manuel Muñoz, riding Fuego de Cárdenas, was at the top of his form, captivating the hearts of the 25,000 people congregated there, converting themselves into the favorites of the night. Scoring an impressive 81.450, they took fifth place.

When Juan Manuel saluted the judges and the crowds, there was an unmistakably electrical change of energy throughout the stadium. The next to compete was Edward Gal with the great Totilas in their final competition together.

Michael Erdmann was the composer of the music ridden to by Juan Manuel Muñoz and Fuego de Cárdenas. For him, the Kentucky competition was highly emotional: “I love PREs and Lusitanos—we even have some ourselves. In principle, there is no difference in production method. But they inspire me in a particular way. For Invasor, the overall image of the rider and horse (first Ignacio Rambla and then Rafael Soto, especially) inspired me. Rafael as the showman and the special Spanish horses needed a symbiosis of rhythm, tradition and beautiful melodies. Fuego and rider Juan Manuel Munoz inspired me to write my own composition. The spectacular movements of Fuego resulted in a composition combining tradition with very modern rhythm.

In the gallop section, the overall image of horse and rider inspired me to create my own arrangement (from 3/4 to 4/4 time) of the beautiful film theme from Max Steiner’s “Theme from a Summerplace”. The implementation of the freestyle and the overall image of horse and rider brought the audience at the World Championships in Kentucky to unprecedented levels of enthusiasm - even during the assessment. It was incredibly emotional.”

Dressage, the quintessential equestrian ballet, will always be one of the most complex sports due to its technical complexity. The musical test makes this thrilling and complex sport more accessible to the public. Freestyle music is not mere back-ground music; it is has been synchronized to the tempo of the horse’s strides. Every change of pace has to be in perfect time with the horse. As Cees Slings—one of the great music composers ever—stated so well, “Freestyle is the pinnacle of Dressage and when it works, the result is magic.”