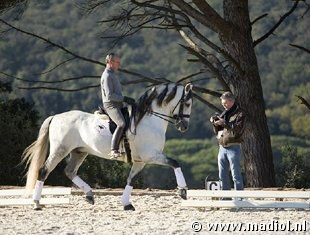 Slings Music Cast has created a new kur to music for the Spanish short listed Grand Prix dressage rider Victor Alvarez and his Andalusian mount Cava-Iles. Not only composing, arranging and producing the new freestyle for Alvarez, but also designing his choreography, the renowned Dutch composer Cees Slings claims that he has made a new statement in his successful 12 years of composing music for dressage.

"The new Alvarez freestyle, with working title“Guerreros de la Paz”, is not just a ‘normal’ freestyle. It shows and tells a story like we never have seen before," Slings told Eurodressage.

The Choreography and Story in detail. 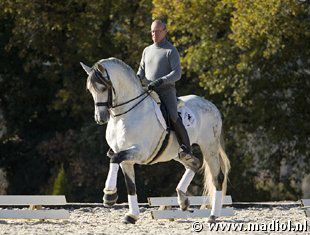 When entering the arena, we see ‘Duke’ Alvarez coming out of the forest in the early morning glow. We hear the tall of Cathedral’s bell when he rides towards his village Santa Marti Vell.

The villagers and the peasants are in great danger; evil forces are trying to get hold of the town and the surrounding farms. The villagers and locals have a warm relation with their Duke Alvarez, he’s there to protect them and he will raise his sword, riding on his strong war-horse Iles.

The villagers cheer and sing a song* of Faith to their loyal Lord, who’s riding on the paved road towards the cathedral.

*see for lyric below 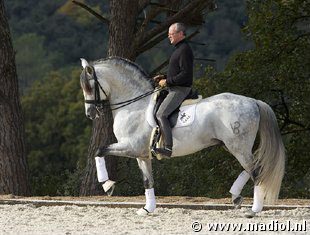 In the village cathedral Alvarez prays for absolution and we hear a boy's soprano in a vocalize, singing a prayer for courage and strength

After this Alvarez, Iles and their men of arms face their enemies outside in the fields.

Alvarez keeps a close eye on the fight, on both sides of the forest making a caprioles and courbettes

Alvarez and his man of arms are getting hold of the enemies, forcing them to withdraw into the forests.

The ride to Victory of Alvarez begins, when also the villagers come to support their man in arms.

(Flying changes in canter every one, half pass to right and left –zig-zag)

Alvarez knows this fight was won, riding towards his village and he’s getting a warm welcome

(extra line of flying changes every two or one, ending up in passage and halt-salute) 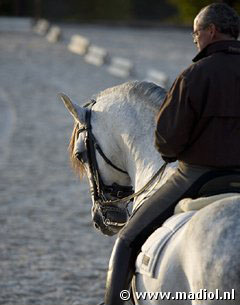 Slings explains his music as following. "We haven't chosen for the traditional Spanish castanet tunes. I wanted something new, something fresh, something revolutionary," Slings said.

"The music and orchestration for this freestyle is rich and powerful, with aggressive orchestral percussion, low haunting horns and brass, dynamic staccato strings, roaring sustained and unsuspected rock guitar riffs, There’s a poem song of a men’s choir, a little boy’s soprano, a mixed man/women choir illustrating the battle; lyrical clusters of woodwinds, leading english horn, flutes and chimes; welding it all together in massive ending praise for a ‘rocky’ symphony orchestra." 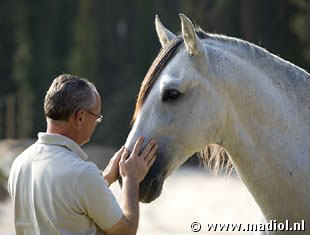 Cees consulted I-judge Eddy de Wolff van Westerrode for a special choreography he had in mind, which looked into the possibilities of horse and rider. Not only the choreography for passage/piaffe part is impressive and new, but the music also adds in this new approach.

As the passage starts with a soft sinister bass clarinet pattern, supported by staccato strings and a ‘weird’ percussive groove, it is lifted with big brass into the piaffe, and all off a sudden a men’s choir appears to support this movement with an, in Spanish language sung, poem. The lyric was written by Slings and translated for him by Maria del Pillar Quintana Bellon, a Spanish teacher at the Amsterdam Music Conservatory. 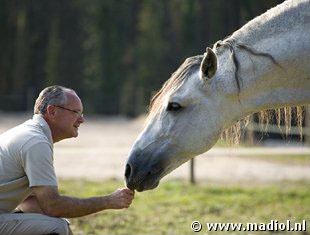 The famous method of Slings and former partner Kerkhof was always to highlight the pirouette in a soft romantic ¾ waltz rhythmic movement, and it was copied many times over by all sorts of kur composers. "The pirouettes of Iles are now strong, in haunting 4/4 movements, as it should be -- almost like lifting the horse as in a capriole or courbette -- with lots of musical power," Slings explained. 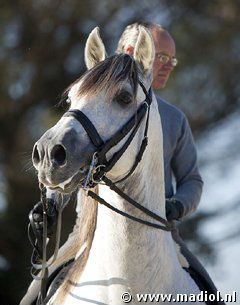 Slings, working with a complete new team now as Slings Music Cast, has strong arguments to bring the freestyle music in dressage into a new era. It was his initiative in 1995 to send Dutch dressage rider Anky van Grunsven a fax, telling her that he liked the horse (Bonfire) and her movements; but that her music and musical production in his opinion were the worst he ever had heard.

Slings and his original musical freestyle approach brought Van Grunsven three Olympic medals in a row, starting with Silver in Atlanta 1996, Gold in Sydney 2000 and Gold again in Athens, 2004. During this period Van Grunsven was the undisputed Queen of the Kur and she won numerous World Cup victories as well as the World Equestrian Games in 2006, which was her most recent major victory in which Slings was playing a leading role in music; not only for van Grunsven but also as ‘ceremonial’ composer for the whole WEG event.