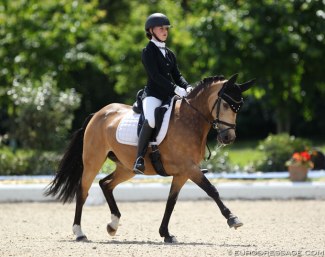 The Swiss Equestrian Federation has announced the team that will represent Switzerland at the 2019 European Pony Championships in Strzegom, Poland, on 13 - 18 August 2019.

Swiss pony team trainer Heidi Bemelmans selected a team of three combinations that were approved by the dressage selection committee of the federation, although four are available to compete.

The final team observation trials were the CDIO-PJYR Hagen in June and the 2019 Swiss Dressage Championships in Basel last week.

Representing Switzerland in Poland are:

Interestingly, Layla Schmid, who has been competing for France this 2019 show season, has now switched to Switzerland and has made it on the team.

Despite ambitious showing this spring and early summer, Antonia Winnewisser and Pav Nobility were selected as a reserve pair instead of on the team.

"I'm looking forward  to travel to Poland with selected pairs that have never participated in a European Championship and support them there," said Heidi Bemelmans. "Our clear goal is to reproduce the achieved successes and performances of the last few months at the Europeans."