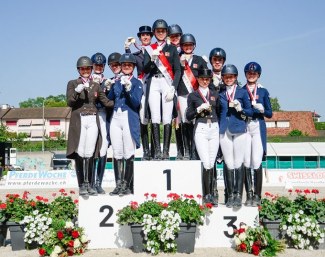 Robynne Graf and her 10-year old German riding pony Dallas (by Dressman) aced the FEI pony division, winning all three rounds against six other combinations including Layla Schmid who has been riding internationally for France. She scored 70.667% in the team test, 71.878% in the individual test and 74.300% in the Kur.

The silver went to Antonia Winnewisser, who is the younger sister of former Swiss junior team rider Naomi Winnewisser. While Naomi has not competed internationally since May 2018, Antonia has been taking centre stage on her 8-year old pony stallion PAV Nobility (by Nemax). They were third in the team test with 69.282%, third in the individual with 69.439% and second in the Kur with 73.450%.

Nater In Charge of the Juniors

Eight combinations competed in the junior championship and Tallulah Lynn Nater took highest honour with  the 8-year old Brandenburg gelding De Vito W (by Desperados x Samba Hit II). She won the team test with 70.514%, the individual with 70.737% and the Kur with 74.760%.

Renée Stadler and her 15-year old Oldenburg gelding Cappucchino XIV (by Competent x Rohdiamant) ended up with bronze. She was second in the team test (69.432%), third in the individual (69.289%) and third in the freestyle with 74.360%.

In the Young riders division, which counted just five pairs, the 16-year old Meilin Ngovan captured the gold aboard Urs Flury's 17-year old Swiss bred Dream of Night Flusswiss (by Dream of Glory x Rubinstein). The pair has not yet competed internationally in 2019 and this is was their first prominent outing at young riders level after transitioning from juniors. They won the team test with 69.447%, the individual with 68.947% and 73.700% in the Kur.

The more seasoned young rider Ramona Schmid and her 10-year old Oldenburg mare Kelly Sue (by Dimaggio x Royal Dance) landed second place and got silver with a score average of 71.515%. They were third in the team test with 68.316%, second in the individual  with 68.632% and second in the Kur with 71.515%

Lars Bürgler and the 13-year old Westfalian gelding Remember Passion (by Rousseau x Pik Donnerhall) finished with bronze on an average of 69.500%. Burgler was second in the team test with 68.553%, third in the individual with 68.105% and third in the Kur with 69.500%.

Unlike the youth riders who have to compete over three rounds for the National Champions, the Swiss senior Grand Prix riders only do two rounds.

Sixteen year after winning her first Swiss senior Grand Prix title on Sappalot in 2003, Birgit Wientzek-Pläge was back on the highest step of the podium at the 2019 Swiss Nationals aboard the Livanos family's 12-year old Hanoverian gelding Robinvale (by Rubinero x Wittinger). The 48-year old Birgit won all three championship round with 72.600% in the Grand Prix and 79.415% in the Kur to Music, just shy of 80% if there hadn't been a mistake in the two tempi changes.

The silver medal went to Estelle Wettstein aboard the 11-year old Oldenburg mare West Side Story (by San Amour x Donnerhall). Wettstein has not yet competed her 2018 Swiss WEG Team horse internationally this entire 2019 show season, but showed good form at the Nationals. This was the pair's first start after a seven month break from competition. They were second in the Grand Prix  with 71.160% and second in the Kur with 75.465%.

The British born Swiss rider Charlotte Lenherr scored bronze on her 15-year old Swiss bred Darko of De Niro (by De Niro x Gagneur). They were third in the Grand Prix with 70.440% and third in the Kur with 73.270%.