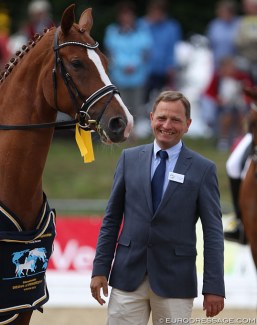 The structural reform of the Hanoverian breed society continues with another board meeting on 13 May 2019 at which it has been decided that Dr. Werner Schade will lose both his jobs effective immediately.

A major power play within the Hanoverian breed society is taking place in period of turmoil because disgruntled breeders have been feeling neglected by a board out of touch with modern day breeding.

Key figures in front and behind the scenes are repositioning the pieces on the chess board through lobbying and mud slinging on social media and in local press publications.  The most important head that had to role, according to the board, was that of the general manager and breeding director, Dr. Werner Schade.

Little over a month ago it became clear that the board wanted these two top positions split into a job for two persons instead of being carried out by one. Schade already felt Damocles' sword above his head and in April he was relieved from the position until the board meeting of 13 May.

After the board meeting the Hanoverian Society posted a short statement on their website which said that it has decided to "terminate the employment contract of Dr. Werner Schade extraordinarily without notice."

"Chairman Hans-Henning von der Decken explained in this regard that in the opinion of the entire board, this decision was unfortunately unavoidable due to several breaches of duty established in the recent past. The board has decided not to disclose any further information."

Just one day later, on 14 May 2019, the Hanoverian Verband posted a job application for the general manager position on its website.