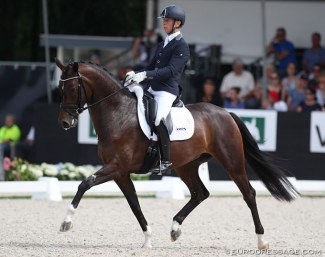 The Dutch Equestrian Federation and KWPN society hosted the first observation and training trial for team selection for the 2019 World Championships for Young Dressage Horses on 22 - 23 April 2019.

This was the first of three observation trials where the selection panel coaches and assesses the team candidates and draws a long list that gets shortened after each trial. The team will be announced after the third session.

Johan Rockx has replaced Alex van Silfhout as one of the selectors. He joins Monique Peutz and Floor Dröge on the selection panel.

The first trial took place at the KWPN headquarters in Ermelo.

"We worked in a very nice way in the best conditions for two days. We got a good image of the horses in the different age categories," said a team selector. "The training after viewing the horses gave good insight in the capabilities of development and it gave the riders information to work with that. We saw much quality, which is why selected a big group for the 6-year olds. The group of 5-year olds is a bit small but it's quality not quantity. For the 7-year olds, the required level was the reason that only a small group was ready for it, but we've seen horses that can already produce a nice test."

Nineteen 5-year olds, twenty 6-year olds and thirteen 7-year olds have been long-listed.  They are:

The second observation trial will be held in Nunspeet. Andreas Helgstrand and Jovian have received a bye for it.