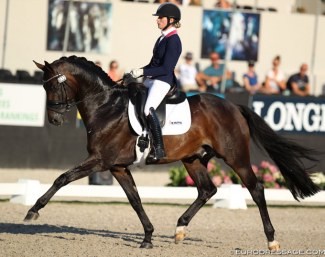 In The Netherlands a first selection moment for the 2019 World Championships for Young Dressage Horses in Ermelo (1 - 4 August 2019) has already been held.

The Dutch Equestrian Federation and KWPN society combine forces for the selection of their horses and organize a series of observation trials during which the selectors set up a long list, which they bring down to a short list and the actual team leading up to the summer championship.

Horses that have competed successfully in the 2018 Pavo Cup Finals are automatically invited to the first official observation trial, but those who did not compete in the Pavo Cup got the opportunity to present themselves at a special selection event held in Ermelo on 13 March 2019.

"It's nice to notice that all three of us are on the same wavelength," said KWPN inspector Dröge. "We believe that a horse needs to have three good basic gaits in order to have a chance to be selected. The performance doesn't have to be perfect as the World Championships are only in 4,5 months, but we need to be able to see room for progress. overall we saw nice, good sport horses that were beautifully presented. We are full of confidence for the first observation trial."

At this pre-selection event for non-Pavo cup participants, twelve 5-year olds, thirteen 6-year olds and eight 7-year olds were invited to the first official observation trial. Several horses got exceptions after the riders handed in valid reasons: In Style, Hermes, and Hot Chocolate.

Four horses that were successful in the 2018 Pavo Cup are excused from the first selection/observation trial: Hashtag (by Cachet L), Intro K (by Apache), Invito (by Furstenball) and Jovian (by Apache).

Invited to the first observation, alongside the Pavo Cup finalists, are: