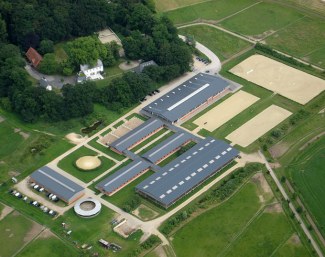 The state of the art equestrian centre Gut Hohenkamp in Dorsten, Germany, is celebrating its 10th anniversary in 2019.

The beautiful and well cultivated yard of over 30 hectares offers a large number of fields as well as its own forest for hacking and relaxing.

Gut Hohenkamp has been several times rewarded by the German Equestrian Federation (FN) with five stars, the highest award. It is the only equestrian center in the region with this distinction and top class reputation.

On 14 - 15 September 2019 an exclusive dressage show will take place at Gut Hohenkamp including qualification tests for the Nürnberger Burgpokal, a very ambitous dressage series for 7 to 9 years old high potential dressage horses.

Sabine Haag Molkenteller´s life dream was to have her own equestrian center and to ride Grand Prix.

Before coming to North Rhine-Westphalia yard owner Haag Molkenteller spent some years in France working in Paris as foreign exchange trader. In 2008 she designed and developed a new modern and stylish equestrian center in Dorsten, close to Düsseldorf for 100 horses.

The official opening of Gut Hohenkamp was in 2009.

Her next goal is to ride Grand Prix.

For more information about Gut Hohenkamp as well as its training and livery facilities, visit www.Gut-Hohenkamp.de