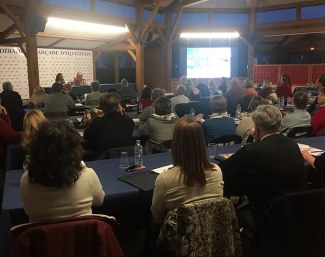 Sixty-nine candidate judges for national, elite and international level were present at the seminar, which was was an initiative of the FFE Technical Director for Dressage, Emmanuelle Schramm.

Clémentine Puret began the seminar by explaining the novelties in the FFE rules, after which Déborah Bardou gave a presentation on animal welfare. The participants asked questions and started a discussion about the importance of all officials working at a show taking responsibility to guard animal welfare.

Benoit Raynaud, who is the preseient of the FFE judges and officials committee, touched upon the topics of communication and the management of conflict, which all participants considered that those subjects would make up an independent seminar on its own.

Judge Wust spoke eloquently about the challenges in judging and she relied on well documented video material for case studies. She provided simple, concrete and well-argued answers that pleased the audience. Her speech was honoured with a standing ovation at the end of the seminar.