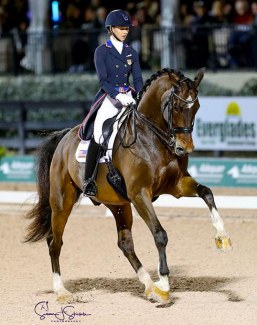 The Global Dressage Festival concluded its second day of competition on Friday, January 11, at the Palm Beach International Equestrian Center in Wellington, FL, with the Grand Prix Freestyle CDI-W. Laura Graves (USA) and Verdades wowed the crowd with their new freestyle and won the class.

Graves said, “I wasn’t that sure which music I was going to do tonight. In the end, I’m very, very glad I chose to do my new music. I don’t know what else I would have been saving it for. I’m just glad that the timing worked out; I haven’t ridden to it yet. It’s supposed to be about the same as my last one, so I just crossed my fingers and hoped that it worked out and it did. I’m so lucky that Terri Gallo just takes whatever idea that I have.”

Speaking of her test, Graves explained, “[I had] a big mistake in my final pirouette. I came at him a bit strong in the spur. And then in the piaffe fan, which we haven’t touched since Aachen last year, I was a bit greedy and selfish in the warm-up. He let me know that he knows his job. He gives such a good feeling when he does go well that any little bump in my hand or my leg is shocking to me.” Shelly Francis (USA) came in second with a score of 79.280%. Francis rode Danilo, a 15-year-old Hanoverian gelding by De Niro owned by Patricia Stempel.

Commenting on her freestyle Francis said, “I made little changes in some of the music. Just little ones, but I left the choreography mostly the same. A couple of years past he would get nervous and kind of get a bit dumb. Now he just gets a little bit of extra energy into it and I need an extra half halt instead of going, ‘It’s okay.’ He is really maturing, but he took me awhile.”

“He’s just a horse you need to take your time and don’t rush him,” she said of her 2018 World Cup Finals partner. “He’s just really understanding the job and puts up with more. Sometimes in the grand prix I’m afraid to ask for a little bit more, and be kind of steady, but he lets me ask for more now. I just have to get braver. He’s getting much more honest and consistent.”

Tinne Vilhelmson Silfven (SWE) came in third with a score of 77.710%. Silfven rode Don Auriello, a 17-year-old Hanoverian gelding by Don Davidoff owned by Lövsta Stuteri. Silfven described that she “really had a great feeling tonight. He just loves this atmosphere. He needs that. He’s used to competitions now and he really loves the atmosphere that comes in the evening with the music. So I had a great feeling.”

Judge at C Hans Christian Matthiesen, commented, “It’s wonderful to be back, and judge. An atmosphere like this, it’s really, really special. And then it’s just nice to be back and see some of these combinations that I’ve seen before, judged before, and then see them strive in this sometime difficult atmosphere when it gets so intense with all the spectators. It’s very special. I must say that I think they did really, really good. We had top performances today.”

Thomas Baur, the Director of Sport at AGDF concluded by talking about the new live scoring system found at www.GlobalDressageFestival.com. “I was waiting for that quite a long time, that we can now use modern technology for dressage,” he said. “A very, very big thank you from my side for Daniel Göhlen and Black Horse One. They did such a good job. I think it’s a major step not only for us here in Wellington, but for dressage world-wide.”

To start off the evening Jill Irving (CAN) won the Grand Prix Special CDI3*, presented by MTICA Farm, with a score of 65.532%. Irving rode her horse Arthur, a 14-year-old KWPN gelding by Jazz.

Irving is from Moncton, New Brunswick, Canada. Irving said that in her test Arthur was “much more, believe it or not, relaxed than last year. He got really worried last year, stage fright and shadows and everything. He was much better this time. I feel like it’s only going to get better.” Irving’s favorite parts of her test were in the extended walk. “He was not trying to jig, which was amazing,” she said. “The last pirouette was awesome and I was pleased with him.”

Looking forward to the rest of the 2019 show season Irving said, “It would be fun to take him to [the Pan American Games in] Peru and just keep going. I have a great freestyle with him, so if he can handle the lights maybe we can come out with a freestyle. I just go day to day. I love riding him; he’s a lot of fun. Peru would be great, but if not, maybe Europe this summer.”

Other classes of the day included the Intermediate I CDI3*. Michael Klimke (GER) won the class with a score of 69.882%. Klimke rode Diabolo, a nine-year-old Hanoverian gelding by Desperados owned by Harmony Sporthorses.