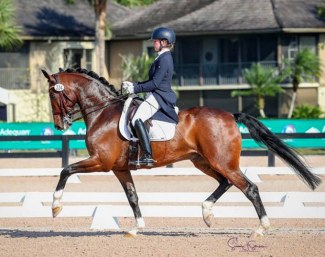 Bred by Imke Wrede, First Connection is by First Dance out of Ramona (by Royal Diamond x Davignon). He was owned by Heinrich Giesselmann.

The bay was first started as a 3-year old by Jan-Dirk Giesselmann. The horse did one show in 2011 and one in 2012. In 2013 and 2014 Angelica Bystrom competing him at A and L-level. First Connection did no shows in 2015 but in 2016 he returned at M-level under Jan-Dirk to move up to small tour level the same year.

The bay competed at a selection number of local events in 2017 and did two shows in 2018, his last being the CDN Elmlohe in July, where he finished fifth in the Prix St Georges Special and second in the Inter I.

First Connection has now sold to Canadian Pia Fortmuller who is based in Florida for the winter. She made her show debut on the new ride last weekend at a national in Wellington. They scored 67.941% in a PSG Test of Choice on Friday 4 January 2019 and 66.176% in the Prix St Georges on Saturday 5 January 2019.

"We did our first show together this past weekend, getting some great scores in the Prix St Georges," said Pia. "It’s just been a couple weeks, so we are still getting to know one another but I am over the moon excited about this elegant gem."