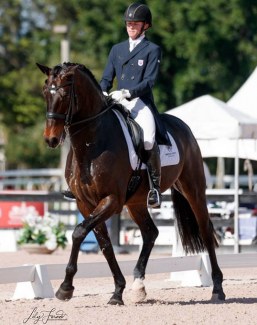 In the spring of 2016 German horse dealer Jochen Arl sold Illuster to New York based Sasha Cutter. The horse had been in training with Portuguese Maria Pais do Amaral where Cutter discovered him. She allocated the ride on the dark bay to California based Shannon Peters.

Peters and Illuster made their show debut at national small tour level in Las Vegas in January 2017. She rode him at six more shows in the spring and early summer that year.

In the autumn on 2017 lluster moved to the East Coast to David Marcus' yard in Wellington, Florida, as the owner wanted to be more involved. Marcus rode the horse at two national shows at small tour level, one in November 2017 and one in February 2018.

Illuster van de Kampert has now been sold as the new young rider's horse for Benjamin Ebeling, who has campaigned Behlinger at international Young riders level in 2018.

"This pair is already developing together so well, and we're excited to see where they will go," said David Marcus about the sale of Illuster.