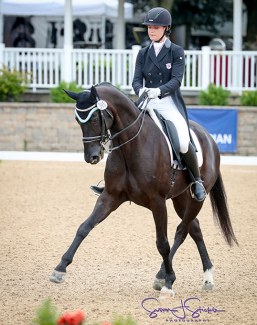 US Equestrian announced the three athlete-and-horse combinations who will compete in the 2018 European Young Rider Tour.

The following athlete-and-horse combinations have been selected for the Tour (in alphabetical order):

The Dressage European Young Rider Tour is considered an important part of the dressage pathway.

“The Tour is designed to introduce our Young Riders to competing internationally, both as individuals and as a team representing the U.S.” said George Williams, U.S. Dressage Youth Coach and Chef d’Equipe. “It is important for our Young Riders’ development to have a chance to compete against their counterparts in Europe. The final leg, the Future Champions Hagen CDIO-Y, is especially exciting as our riders will be going head-to-head as a team against a number of the best of their division in the world."

The Tour will send Ebeling, Jones, and Weniger to a series of competitions, with the highlight competition being the CDIO-Y Hagen from June 12-17. Additionally, Jones and Weniger will also compete at the CDI-Y Compiegne from May 17-20 and the CDI-Y Aachen from May 29-31.