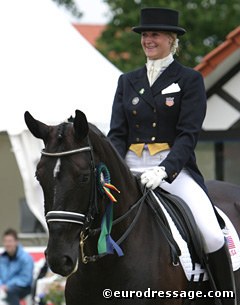 Thanks to the generous support of Scott Hassler of Hilltop Farm, the American young riders' duo was able to travel to Europe at a minimum of cost and borrowed two schooled Intermediaire I dressage horses from international dressage rider Michael Klimke and Americans Robin and Bill Weiss.

For Austin and Malone, the CDI-YR Hagen was an eye opening experience. Riding against the Belgian A-team Young Riders, the German B-team and several other experienced combinations from Holland, France and Denmark, the pressure was definitely on.

Aboard the black Hanoverian mare Dorana (Donnerhall x Pik Bube), Austin scored 58.96% in the team championship test, placing 18th, and 61.50% in the Prix St Georges, placing 8th. Mary Alice Malone Jr received Cascade as a ride, a dapple gray Holsteiner mare by Corofino x Fasolt. In the preliminary and team test they finished 19th with 56.38% and 58.88%. In the Prix St Georges, Malone and Cascade were more on the same wavelength and pushed the score up to a nice 61.20% and 9th place.

Horses and Dreams for Austin and Malone 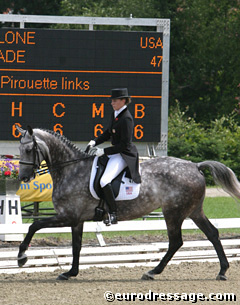 Not only were these American girls challenged by some of Europe's best young and most experienced young riders, but they also had only one week time to get to know the horse. "We rode the horses five times before we had to go to the show," Austin replied. Considering that, Austin and Malone put down very good performances in Hagen and definitely did not lose face.

In the Sunday's Individual test (PSG), Malone showed a very nice trot tour aboard Cascade. The light footed mare has a beautiful front leg, which she shows off well in the traversal movements and extensions. Austin and Dorana showed great shoulder ins and a very decent canter tour with only a few hiccups in the flying chances, which -- as a matter of fact -- were a stumbling block for almost every young rider in Hagen.

After three rides and four days of competition, Austin and Malone reflected with much enthusiasm on their Hagen experience. "It was so much fun and we learned so much," Austin said, adding "it's so difficult to compete here against all these great riders."

Mary Alice Malone jr was also very impressed by her week in Europe. "I wish we could have gone to a smaller show before this competition. There is so much difference between schooling a horse at home and riding them at a huge show such as this one," Malone explained.

Austin and Malone "Earned" Their Trip to Europe 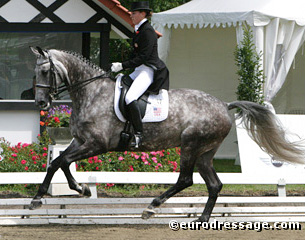 Elizabeth Austin and Mary Alice Malone Jr. were the only two American riders selected to compete in Hagen. "We cannot thank Linda Zang and Scott Hassler enough for this opportunity. They both supported us very much and made this trip a unique experience," said Malone and Austin.

Chef d'Equipe Dennis Callin was very skeptic about the criticism Malone and Austin had to face, when they got selected for Hagen. "Both riders have been selected by the USDF based on their merit and nothing else. Elizabeth has had a super year in 2003 and continued her successes this year. Malone has been competing at the North American Young Riders Championships since 1999 and this with three different horses. And, she has been a team silver medallist," Callin stated. "Why can't people just be positive about this?" he added.