Dujardin and Valegro Enthuse the Crowds at 2018 Liverpool Horse Show 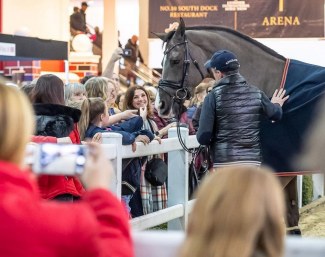 Two years after his official retirement from competition sport, double Olympic champion Valegro continues to enthuse the crowds and be a magnet for international dressage sport.

Carl Hester released two videos most recently on Facebook featuring Valegro in action. One video had his 11-year old god child Ruby Hughes (Gareth and Rebecca Hughes' daughter) riding Valegro. The other video is Valegro and Uthopia riding a pas-de-deux in Hester's flooded pastures at home to Nutcracker music.

"Charlotte and I, Valegro and Uthopia doing our Dance of the Sugar Plum Fairy for Christmas in the rain," Carl posted on Facebook. "Merry Christmas to all our friends and followers; see you in 2019!"

Valegro was the star for the crowds in a 15-minute demonstration. Check out the video of this demo ride.