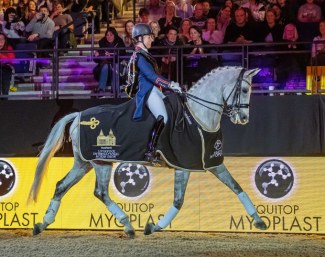 Nine of Great Britain's top Inter I combinations provided the perfect curtain raiser to the 2018 Liverpool International Horse Show under the lights at the iconic Echo Arena.

Competing for the honours in the invitational Inter I Freestyle, Warwickshire rider Kate Lister got us underway with her British-bred World Exclusive and 71.813% from the two judges Jo Graham and Debbie Jones to set a great bench mark.

It was then the turn of ex-Carl Hester stable rider Katie Bailey with the 11 year old Boccelli who she rides for Leslie Forlee. The leggy chestnut showed some lovely work in the trot half pass set to uplifting violin music and the judges were impressed to score 77.188% for a commanding lead.

Double World Para gold medallist Sophie Wells was next with Charlotte Hogg’s C Fatal Attraction, the duo making their first outing since Tryon at the end of September. It was a huge atmosphere and ‘Jorge’ was a little stage struck. But Sophie knows him well and a calming walk around the arena before signalling the start of the music put him in the right mindset. A small blip in the changes and some inconsistency in the contact were the negatives and 76.813% was the score to go into second.

Louise Davison was next into the fray with another British-bred contender, De Galles and their clever routine to music dominated by the violin scored 67.938%.

Then onto North Lincolnshire’s Amy Woodhead riding Victoria Wright’s Breitling W stallion Branduardi. They showed some excellent work and were very consistent in the contact; Amy electing to ride in a snaffle. They scored 74.75%.

Our sole international rider went next which was Oxfordshire based Ulrik Molgaard with Anji Lucas’s Salo. They put up a polished test with a lovely extended walk and some good canter work to rock guitar music to score 71.625%.

It was then the eagerly awaited turn of the red hot favourites, Charlotte Dujardin with her own and the Dockely’s Florentina VI. Charlotte had already had a spin around the arena earlier in the evening but with her legendary partner, Valegro. The Liverpool crowd were treated to a rare display of Charlotte riding the double Olympic champion and rising 17, he’d lost none of his magic or ability.

Charlotte rode to the same music as last year when she campaigned En Vogue here to finish second and it suited the Vivaldi-sired grey mare to a tee. The eight year old was clearly on her toes in the big atmosphere and there was a blip in the first line of two time changes but she went on to show two further clean lines. You can see the Grand Prix movements are not far off and a massive 81.938% was the confirmed score for the lead.

Our final combination was Sarah Higgins and Waldassarini, owned by Sarah Rao and they were third last year so knew what awaited them in the Echo Arena. They showed some spectacular trot half pass work and ended the test with a perfect square halt to earn 74.25%; not enough for the lead.

So it was Charlotte and ‘Flora’ who topped the podium, followed by Katie Bailey with Sophie Wells in third.

Afterwards, Charlotte said; “She was amazing tonight. It’s such an incredible show and it’s so great to bring horses into an atmosphere like this. She nearly caught me out as for the first time ever she was spooky which was a surprise as she’s normally so reliable. But she tried her heart out. We’ll move up to Inter II next year with a view to try some Grands Prix by the end of the year.”

Katie was pleased with her partner Bocelli 6; “I’m thrilled with him. He’s never been in an atmosphere like this and he was really looking at himself on the big screen in my first medium [trot]. After that he got stuck in and was really good.”
And Sophie summed her ride up in saying; “He was really excited but he kept it together and got better through the test. I had some mistakes in my changes but that’s down to him being tense through the excitement as he’s not been out since WEG. I’m working to improve my PBs in my straight tests next year – I know there’s an 80% in there!”