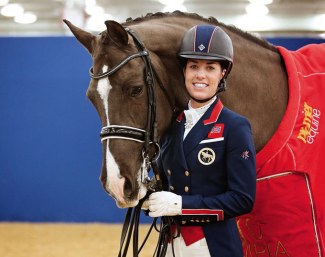 Dressage stars will light up the Theraplate UK Liverpool International Horse Show stage at the iconic Echo Arena on the opening night of the equestrian and family extravaganza.

Britain’s finest, Carl Hester will also be in attendance at the show for a meet and greet, as will the iconic and record-breaking Valegro for a parade and celebration of his amazing success.

Said Liverpool International Horse Show, Dressage Consultant, Richard Davison: “The show is one of the most exciting on the international calendar and it is great to have dressage back for a second year.

“We can always rely on Charlotte Dujardin to provide a masterclass when it comes to competition riding and we also have the very best judges in Jo Graham and Debbie Jones to deliberate over those much sought after leading scores.”

Added Liverpool International Horse Show President, Nina Barbour: “We are delighted to be bringing dressage to the show once again and to have Charlotte and her fellow competitors at the event is just fantastic.

“The sport of dressage has grown beyond recognition and we are looking forward to watching some of the most talented and up and coming dressage horses in the country as they work towards Grand Prix.

“The Echo Arena is a fantastic venue and there will certainly be plenty of atmosphere to give the crowd a real taste of top class dressage.”

As well as dressage on the opening night, December 28, for those visitors making it a New Year to remember they can look forward to a showjumping feast on New Year’s Eve, December 31, with the prestigious Theraplate UK Grand Prix one of the highlights, when leading names will battle it out to take top honours.

Theraplate UK Liverpool International Horse Show Grooms Get Chance to Win a Car for a Year!

This year’s Theraplate UK Liverpool International Horse Show – December 28 to 31 - will see two new awards launched at the prestigious event – with one lucky groom winning a car for 12 months!

The Golden Groom Award and the Peak Performance Award are being supported by Theraplate UK and include the use of a fantastic Toyota Aygo car for the winning groom for a year.

The winning rider, owner or trainer will win the use of a TheraPlate for six months.

As the leading therapeutic performance platform used for equine sports conditioning and injury rehabilitation, TheraPlate UK truly understands how important a groom’s role is in maintaining the equestrian athlete.

The Golden Groom Award will be presented to the groom of the best turned out horse which has tried the TheraPlate at the Liverpool International Horse Show.

Dominic Fox, owner of TheraPlate UK said: “The Golden Groom Award recognises the groom’s role within the equestrian industry. Equestrian sport regardless of the discipline would not be the same without the endless hours of hard work and dedication from our grooms.

“The Golden Groom Award is a great way for TheraPlate UK to support and reward this commitment. The winning groom will receive a trophy and the use of a Toyota Aygo for a year.”

The Peak Performance Award will be presented to the rider, owner or trainer of the horse from the Golden Groom Award. This horse will have been judged on condition and overall wellbeing. For this award, the winner will receive a trophy and the use of a TheraPlate for six months.

Following a successful career in horse racing spanning over 25 years, ex jockey Dominic Fox is committed to giving back to equestrian sport.

Said Dominic: “We hope that the Peak Performance Award and the Golden Groom Award reflects our understanding and commitment to the equestrian industry. Performance and wellbeing go hand in hand and it takes a team to succeed, these awards will certainly make a difference to the winning team.”

Said Show President, Nina Barbour: “We are delighted that Dominic and the team from TheraPlate UK have generously supported this prize. The commitment and dedication of the grooms in this industry is second to none, and often gets overlooked.

“We will be honouring the prize with a special presentation on the podium just before the New Year’s Eve celebrations start.”

The presentation to the lucky winner of the Theraplate UK Golden Groom Award and Peak Performance Award will be made after the presentation of the Grand Prix competition on New Year’s Eve.

Hospitality at The Liverpool International Horse Show is second to none and makes a fantastic present for great friends and family. Whether on the purpose-built platform at the head of the arena or in one of the VIP boxes – you won’t be disappointed.

This year’s Liverpool International Horse Show will see a host of leading names in action from December 28 to 31, at The Echo Arena on Liverpool’s iconic waterfront.