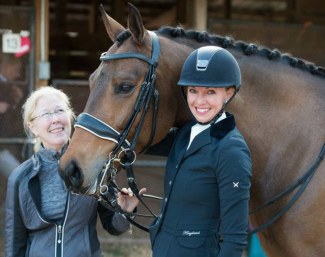 American number one Grand Prix rider Laura Graves has her hopes for the future in three horses, even though she does not plan on retiring her rising 17-year old top horse Verdades any time soon.

In an interview with Ken Braddick of Dressage-News.com, Graves revealed that she is aiming to compete at the 2019 World Cup Finals in Gothenburg with Verdades. To obtain a berth, she will need to achieve three qualification scores in the upcoming months in Wellington.

Graves and Verdades scored double silver at the 2018 World Equestrian Games in Tryon last September and has given her horse a break after that.

"Now that I have started him back in work (and had to bail off of him twice to lunge him!) it is clear he is not ready for retirement," she told Braddick.

Laura has not competed any other horses on the international show circuit except for Verdades. With the Dutch warmblood rising in age, all dressage fans are kept wondering what the future has in store for her or if the American will be a one-horse-wonder like so many stars before her.

“Hopefully I have something close one day,” she said. “If you can hold a measurement to what I have with this horse it would be something special to watch. But I know in my heart that this is the horse of a lifetime.”

After the retirement of double Olympic champion Valegro, Charlotte Dujardin already had a string of horses lined up to continue her international dressage career. She won just one year off from international GP level, making her come back in 2018 with Mount St. John Freestyle, which earned her double bronze at the 2018 World Equestrian Games. In 2017 and 2018 she competed Hawtins Delicato, Florentina and Rise River Escarla at international small tour level.

Graves, however, says she will have to take a step back.

“It’s not that I have a barn of 100 to pick from Prix St. Georges horses and say, ‘OK, I’ll turn you into a Grand Prix horse in two years.’ I’ll be taking my time and finding hopefully something really special. And hopefully you’ll see me on another team," she told Braddick.

Graves has three horses for the future at the moment. She bought her own 4-year old KWPN gelding Jahmairo (by Chagall x Krack C - affectionally named YoYo/JoJo) from the prize money she won in 2014. She also rides the 9-year old bay Westfalian gelding Fizau (by Fidertanz) for owner Susan Shattuck and aims him at developing Grand Prix level in 2019. Her third iron in the fire is Dale Nielson's 5-year old KWPN mare Stella (by ) which she might ride in the FEI 6-year old tests.

“I will bring each of these horses to their full potential, whatever that may be,” Laura said. “This is the fun part. The problem solving, the light bulb moments, learning to turn LEFT! You know, big milestones for babies. But I do believe that this work, done correctly, is the only way to get to that international ring (or any ring for that matter). I am confident in my system and the people I have surrounded myself with for help and support.”

Read the full interview on Dressage-News.com