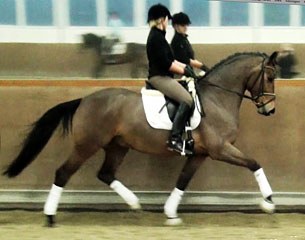 For the first time since her stellar rise on the American dressage scene, Laura Graves has introduced a new horse to show ring, Fizau. The pair made their show debut at the 2017 CDN Wellington on 24 - 26 February 2017 and competed in the Developing Prix St Georges horse classes.

Between 2014 and 2016 Graves and Verdades became America's number one Grand Prix pair and their fourth place finish at the 2016 Olympic Games was historical. Verdades is now 15 years old and though he has several more years to go, it had been quiet about who the potential successor might be.

Fizau is the first horse that Graves has competed in Wellington other than Verdades. The 8-year old bay Westfalian gelding is by Fidertanz and owned by Susan Shattuck.

"We do have an eye open for possible successors to Verdades," Graves told Eurodressage. "In the meantime, I feel so lucky to have this horse in my barn and lucky he has the very best owners."

At the national CDN Wellington Graves made her debut on Fizau. In the Developing Prix St Georges horse practise test, she scored a winning 70.294% in a field of three. In the actual qualifier for the U.S. Developing PSG Championships next summer, Graves and Fizau paced fourth with 71.103% in a field of five. The class was won by Nora Betchelder on the 8-year old Hanoverian Fifi ML W (by Fidertanz x Wolkentanz I) with 73.603%. 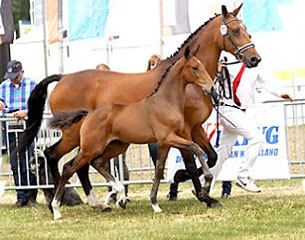 Fizau is a 2009 born Westfalian gelding by Fidertanz x Maquisard xx bred in Germany and previosuly named Fitz HW. Graves has been riding him since the winter of 2014.

"His lovely owner Susan Shattuck-Fryett contacted me after the WEG in France," Graves explained. "He is very personable and an easy favorite in the barn for staff and visitors. This year we are trying to qualify for our Developing Horse Championships at the PSG level. We will see what he is capable of along with my coach, Debbie Mcdonald. "