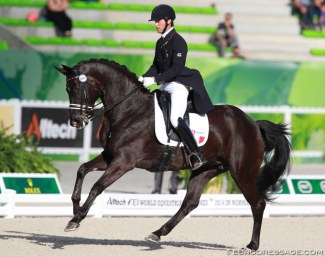 It is with a little pain in our hearts, that we announce today the sport retirement of Noble Dream," rider Marc Boblet and owner Cathy Dallara announced on Facebook. "Following a check before vaccination our vet detected an anomaly. After several tests we confirmed a malfunction in the heart rate. Today we all agree with the owners Laura, Caty and Jean-LouisDallara, as well as his rider Marc Boblet, that it is time for her to approach a new life."

Noble Dream is a 16-year old Oldenburg mare by Caprimond out of Noble Affair (by Donnerhall).

In 2012 the mare made her international Grand Prix show debut at the CDI Hamburg under French Marc Boblet. The duo represented France at the 2013 European Championships in Herning, the 2014 World Cup Finals in Lyon, and at the 2014 World Equestrian Games in Caen.

In 2015 Noble Dream was beginning to struggle with the piaffe work and with coping with traveling. In April that year the owners and rider announced that the mare suffered from ovary problems which required treatment. The pair showed at the 2015 CDI's in Addington, Compiegne, Rotterdam and Deauville, but was not selected on the French team for the 2015 European Championships in Aachen, much to the rider's upset.

The duo only did two shows in 2016: the indoors in the late autumn in Le Mans and Geneva. Her last competition in Geneva two years ago results in the victory in the Grand Prix Special with 69.392%.

Noble Dream will now be retired to the field at Marc Boblet's yard.

"Unfortunately she won't be able to have any foals," owner Cathy Dallara told Eurodressage. "She was operated on in April 2015 for severe ovary problems. It was a shock to us because we always wait to put the mares into foal once they are retired. It is not planned that she will leave Marc. She will eat all the grass in his paddocks."