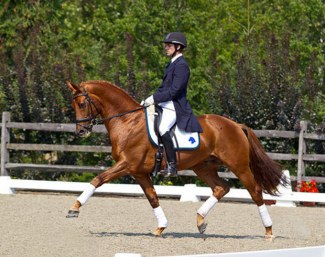 Iron Spring Farm's Dutch warmblood licensed stallion UB40 has been euthanized on 10 March 2018 following a period of illness. Only one month ago, the chestnut was proclaimed Keur at the 2018 KWPN Stallion Licensing.

"He had an undiagnosed illness and took a sudden turn for the worse," the ISF press release read. "We made the humane decision to let him pass to spare him from suffering. UB40 was a sweet and talented stallion and will be deeply missed here at the farm."

UB40 was by Olivi out of Kilucienne (by Michelangelo x Farn).

He was licensed in 2004 and sold at the KWPN Select Sale auction for 145,000 euro to Wim Zegwaard. A year later he sold to Iron Spring Farm in the U.S.A. and he only bred for a brief while in The Netherlands. Under Alex Robertsen, UB40 was competed at national level from young horse to small tour between 2007 and 2010 in the U.S.A. UB40's most successful offspring is the international Grand Prix stallion Apache (Emmelie Scholtens).

A necropsy is being carried out on UB40's body to discover the reason behind his illness. The stallion began showing issues three months ago, which veterinarians were unable to accurately diagnose and treat despite many efforts.