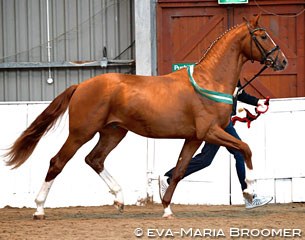 Despite the early start and late finish, punctuated by two dramatic thunderstorms, our breeders were not deterred from travelling from as far afield as North Yorkshire, Devon and Cornwall, to present the best of British horse breeding in the main arena in front of German judge Katrin Burger.

Open to all British-bred mares, foals and youngstock up to 3 years, of all disciplines, breeds and types, there was a class and championship for everyone. With generous prize money on offer for both horses and ponies, all horses placed 1st and 2nd went forward to the final championship judging.

In the morning qualifiers of the Foal Championships Fortuali GF (by Follow Me out of Dolita), bred and owned by Sandy Senior, placed first and Caoline Leigh's Mr Smart SHS (by Sir Donnerhall out of Wiegro) was second.

In the Futurity Elite Championship Zahra Sadry's Reggatta d Blanc (by Revolution out of SPS Zandra) won the dressage title ahead of Sandra Tinker's Fosshey Sir Don Delicisou (by Sir Donnerhall out of Delta).

In the Great British Mare Foal & Youngstock Championship Nicole Nelsen's Tramontana For Elfenblume (by For Romance out of Damina) topped the leaderboard ahead of Sandra Tinker's Fosshey For Fun (by For Romance out of River Riva). The Champion foal was also named reserve dressage champion behind Woodlander Gloria.

The supreme show champion of the 2017 BEF Futurity Championships, however, was a show jumper: Lisa Maynard’s 3-year-old stallion, Balou For Pleasure (by Balou de Rouet).

Results can be viewed here.