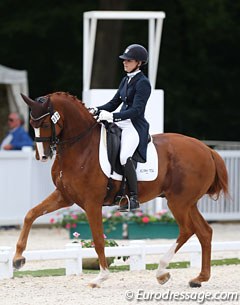 A few days after the announcement of the French Grand Prix A-team for 2017, the French Equestrian Federation also released the names of the horses who have been marked as "potentials" for A-team submission.

The French Federation does not use the traditional A and B-squads denomination, but refers to the elite group of Grand Prix horses as the JO/JEM groups, signifying horses with potential for the Olympic Games/World Equestrian Games.

The owners of the JO/JEM listed horses get extra support from the federation for the training and competing of their horses by France's elite Grand Prix riders.

The Technical Dressage staff of the FFE has now also marked the horses that are potential candidates for JO/JEM squad submission. They are: