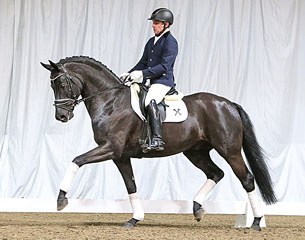 The 5-year old licensed stallion Spotlight (by Sir Donnerhall I x Wolkentanz I) became the price hightlight of the 2017 Hanoverian Auction in Verden, Germany, on 25 March 2017.

Bred by Carsten Müller and owned by Helmut von Fircks, the black Spotlight sold for 185,000 euro to Italy. The stallion finished seventh at the 2016 Bundeschampionate and got licensed after successfully completing the Verden Sport Test in March. The same Italian buyer also acquired three further sport horses and a foal.

The second most expensive horse in this auction was the 5-year old stallion Royal Side (by Royal Classic x Riverside), which sold for 95,000 euro.

The most expensive show jumper was Quadis (by Quaid x Chacco Blue). He sold for 55,000 euro to The Netherlands. The jumper mare Quick Step (by Quaid x Stakkato) sold for 50,000 euro, while the 4-year old jumper Springtime (by Stakkato x Cornet Obolensky) achieved a knock down price of 46,000 euro.

The best selling foal of the auction was the colt Mr Moonlight (by Martinez x De Niro) which switched owners for 21,500 euro.

The average price for a sport horse at this auction was 21,351 euro. Twenty-eight foals were sold for an average price of 6,000 euro.