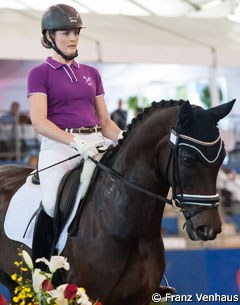 Melanie Campbell (née Schmerglatt) will return as young horse guest rider at Australia's most prestigious international dressage competition, the 2017 CDI Sydney CDI. With the focus of this year's competition switching to the next generation of dressage riders in the post-Olympic year, Sydney CDI also showcases some of Australia's most exciting up-and-coming young dressage horses.

The 2017 CDI Sydney is taking place on 27 - 29 April 2017 at Sydney International Equestrian Centre (SIEC) and alongside its CDI program also features the regional young horse championships.

Campbell recently returned to Australia after spending several years as a professional trainer and auction rider at the world-renowned Hannoveraner Verband e.V. stables in Verden, Germany. In the past six months she has been working and training with her brother, Robert Harrisson Schmerglatt, in Munich. Melanie was guest rider at last year's Sydney CDI.

1. You were the guest rider at last year's event - what did you think about the quality of the young horses you were presented with?

the mind to handle going up the levels but didn't necessarily have the flashy big movement and a couple that had both attributes. Then a couple that didn't handle the atmosphere of the indoor very well so it was a little hard to tell. All in all I really enjoyed riding and assessing all of the young horses.

2. Have you seen a change in the type of horse being bred in Australia for dressage in the past few years? What have you noticed?

Yes absolutely. I think we are finally getting a much better foundation of mares in Australia. I think we are lucky to have a some very good breeders that have realized the importance of having a good quality mare and have imported mares from Germany. Which is now starting to show in our breeding system. Our young horses are starting to become comparable to some of the young horses in Germany. The biggest difference is there are a lot more horses in Germany and it's a bigger industry so they have a better chance to breed the super big moving flashy youngsters. Plus they can experiment more having such a huge pool of bloodlines to choose from.

3. Are we headed down the right path in terms of breeding a suitable style of dressage horse in Australia, so we can be internationally competitive?

Yes I believe we are. The biggest thing that has to be kept in mind within the breeding industry is that temperament is the most important thing and should be taken into consideration above anything else. There are more amateur riders than there are professionals and that is a bigger market. Most amateur riders are not suited to a huge flashy moving horse with the hotness which is required for a Grand Prix horse. I think that it is important that breeders keep trying to breed a horse for these riders but also try and breed something that is suitable for a professional rider. 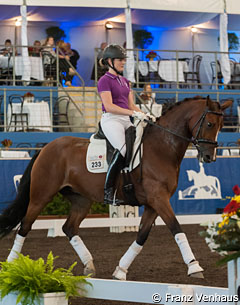 4. What would you say our strengths and weaknesses are in terms of the training of our young horses?

I believe that a big strength we have in Australia is the way our horses are brought up from a foal through to riding horses. Training a young horse doesn't just start from when we get on their backs, it starts from the moment they are born. The horses are grown up in totally different conditions to our European comrades, being allowed to mature and grow in the outdoors in a much more natural environment. The horses hooves and stronger legs and bones are a testament to this. Another big strength I notice and I find is very refreshing, is the keenness the people in Australia have to learn and to take in information. The dressage world is still very much in its infancy here in Australia compared to their counterparts in some other countries such as Germany and Holland, who are undoubtedly acknowledged as the leaders in the dressage world. The Australian riders, however, are very keen to learn and are hungry to gain more information from their superiors. They are prepared to give almost anything a go, and it is this attitude combined with the quality horses that Australia is now producing that make them such good learners as they are not so set in their ways, so to speak. Our country is so vast and so far away from Europe making it hard to adopt a system similar to Germany, however I really believe because of the determination of the people in Australia we are becoming a much stronger equestrian community.

This is of course a very generalized answer. A weakness I really notice in the training system in Australia and everyone has heard it before but of course the lack of the basics. We are told this over and over again but it is so hard when you don't have someone drumming it into you everyday like in Germany. There is such an incredible system in Germany that prepares the riders and horses for FEI. It is definitely something that Australians still need to learn. Germans are simply so self disciplined about everything. It's just incredible. From a competition point of view there are a lot less young horse competitions here in Australia than in Germany. This I believe makes a huge difference for the horses. The young horse tests and young horse dressage tests for four, five and six-year-old horses that are used, set the horses up for a normal dressage test. The young horse tests allow for the horse to be able to spook or make some small errors and not get marked really low for it. It's not usually until the horses are seven years old that they start to do normal tests where they are marked for every single movement. The German dressage tests are a lot different and I find prepare the horses really well for FEI. I do believe that somehow we could incorporate these young horse dressage tests into our competitions quite easily.