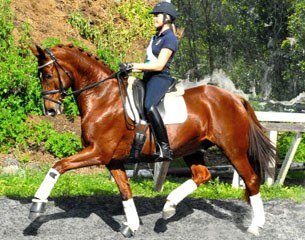 The Sydney CDI Organising Committee has announced that Melanie Schmerglatt will be the young horse guest rider at the 2016 CDI Sydney CDI on 6 - 9 April 2016.

Melanie was born in Maryland, U.S.A. and moved with her mother Linda and her brother Robert to Queensland, Australia, when she was only 3 years old. Very early on in her childhood she showed a natural talent and passion for horses and riding, and it was not surprising to soon see her in the competition arena, following in her mother’s footsteps.

Melanie was selected onto the Queensland State Young Rider Squad for two consecutive years with her rather ‘unpredictable’ but stunning grey warmblood gelding “Masterpiece”. Together, under the guidance and expert teachings of Linda, they successfully competed to Prix St Georges level. Since then Melanie has trained and competed numerous successful horses to all levels of dressage.

Currently she is a highly regarded professional trainer and auction rider at the world renowned Hannoveraner Verband e.V. stables in Verden, Germany.  While in Germany she has been training, riding and competing some very talented young horses for which the Hannoveraner Verband have great future hopes for, including an extremely talented young stallion that Melanie was training called "Dream of Australia", a Don Index son that she won with in a number of young horse classes.  They went on to be highly placed in the finals of the Hanoverian championship in Verden, at the World Young Horse Championships last year.

Melanie is currently training with Hans Heinrich Meyer zu Strohen, who is considered one of Germany's top trainers, on a number of young horses and on her 8yo Fidertanz gelding and 6yo Soliman de Hus mare which she plans to compete on in Germany this year.

The Young Horse qualifying competitions will be held on Thursday and Friday and the top three horses in each age group will be eligible to take part in the final round on Saturday afternoon.  Performances in young horse qualifiers leading up to this event are a strong indication that it will be a close contest.