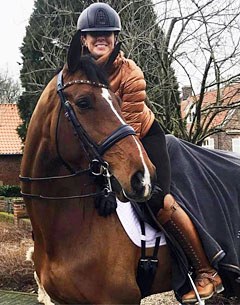 "Ellie has been with us a few weeks," Oatley told Eurodressage. "She is at small tour level, but has an amazing talent for collection and an attitude to match. She is a pleasure to be around and work with, with credit to her family for her upbringing and care. She has three great paces, a great attitude and a great ability for the collected work so I am just thrilled."

Elvive is a 2009 born KWPN elite mare by Tuschinski out of Adonnee de Jeu (by Don Schufro x Cocktail). Under breeder Veronique Roerink, the mare was competed in the young horse classes in The Netherlands. The pair won bronze at the 2015 Dutch Young Horse Championships in Ermelo.

Lyndal's parents Carol and Sandy Oatley purchased the horse for their daughter. Lyndal will take it slowly with Elvive as Grand Prix is the ultimate goal.

"We will take our time and develop her slowly," she said. "We have made no plans of yet, but maybe a few small tours this year, and also come along with Sandro boy to train at the bigger events. Then the focus is on the Grand Prix, but for now we are just enjoying becoming a partnership and enjoying the journey." 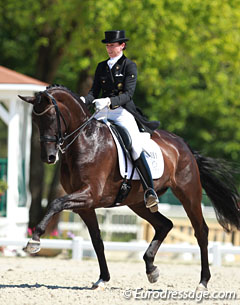 Oatley's number one horse is her Olympic Grand Prix horse Sandro Boy. She also has the now 9-year old Swedish warmblood mare Diva (by Richfield x Silvano) which Lyndal actively competed at international small tour level in 2015. The mare was sidelined in 2016 due to a virus that turned out to be difficult to treat. The mare is now back in training.

"Diva is going brilliantly, but was side lined for half a year with a virus that severally damaged her lungs," Lyndal explained. "She is a fighter and spent time in intensive care, but thankfully has made a full recovery. We have taken our time bringing her back as we did not want to cause her stress . She is really becoming established with all the Grand Prix. Very proud of her for coming back so well."