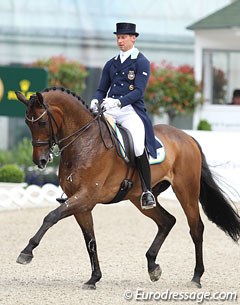 The 16-year old Swedish warmblood gelding Toy Story has been retired from competition. The bay gelding had been struggling with recurrent stomach issues and it was decided in his best interest to retire him to the field.

"Problems with his digestion and weight have plagued Toy for some time, and the decision was made to let him live outside with his golden oldies and enjoy grass feeding and a time away from riding and competition," said Toy Story's rider Patrik Kittel. "Toy has sadly not returned to his old self, and with a heavy heart we made the decision in his best interests to retire from competition."

Toy Story is bred by Marie and Olle Bjernick in Sweden and is by Come Back II out of Cessna (by Concorde). He was for sale at the Dutch dealer's yard Stable Korenbloem in The Netherlands, where the Oatley family discovered him in 2009 as a successfor for Lyndal's first Grand Prix horse Potifar.

Lyndal and Toy Story competed lightly at German national level but the ride on the big bay gelding was given to husband Patrik Kittel when he proved to be too much horse for Lyndal."

"Toy surpassed all our expectations," said Kittel. "The big power pack was not the best match for Lyndal, and so with the support of Lyndal"s parents became a horse for me."

Kitell and Toy Story won the Swedish Grand Prix Championships twice and they represented Sweden at the 2013 European Championships in Herning, Denmark, where they finished 17th in the Grand Prix Special. They contested the 2012 World Cup Final in 's Hertogenbosch, where they were 8th.

"Toy was always larger than life. To ride he was quirky and full of cheek, and had his own mind, which is why I love him so much.  Once he entered the arena no one tried harder than Toy. He never wanted to make a mistake and loved all the attention, growing with confidence and pride with the more audience the better. He is always chatty, and calls out to chat all the time and meet us when we enter the stables, no matter the hour. He is the big giant with the gentle soul," said Kittel.