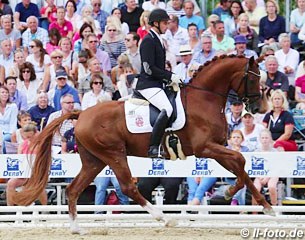 The 3-year olds Destacado and Festina PS and the 4-year olds Don Martillo and Sisters Act became the grand champions of the riding horse finals held at the 2016 Bundeschampionate in Warendorf, Germany, on 31 August - 4 September 2016. The riding horse classes are a highly popular leg of the German young horse championships as it's a gauge of the young talent and stallion potential brimming in the country.

The Hanoverian stallion Destacado (by Desperados x Londonderry) became the winner of the 3-year old riding horse class for stallions. Bred by Heirnich Giesselmann and owned by Friederike Lohse, Destacado was ridden to victory by Pascal Kanziora. The chestnut stallion won the warm-up round and did not let go of the lead in the finals. He scored 8.5 for trot and canter and 9 for walk, training and confirmation. The two guest judge riders also rewarded the horse a double 10 for rideability and potential. Hermann Gerdes and the German Sport horse stallion Marc Cain (by Millennium x Don Primero) were the reserve champions. Bred by Ulrich Vité and owned by Gestut Sprehe, Marc Cain scored 9 for trot and canter, 8 for walk, 8.5 for training and 9 for conformation. The two guest judge riders scored him 19 points in total. 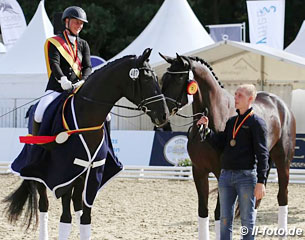 Anja Engelbart and the Oldenburg mare Festina PS (by Furstenball x Festrausch) won the 3-year old mares and geldings class. Bred and owned by Paul Schockemohle, the black mare was the winner of the warm up round and also reigned in the finals. She scored 9.5 for trot, 8.5 for canter, 8 for walk, 8.5 for training and 9 for conformation. The guest judge riders gave her 19.5 points in total. Anja Dütsch and the Hanoverian Brasilia (by Benicio x Lauries Crusador xx) were the reserve champions. Bred and owned by Eibe Icken, the chestnut mare got straight 9s for walk, trot and canter, 8.5 for training and conformation and 18.50 from the test riders. Engelbart also captured the bronze medal on Farosa PS (by Fürst Romancier x/ Sarkozy). 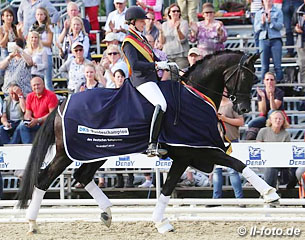 Ann-Christin Wienkamp and the Hanoverian Don Martillo (by Don Juan de Hus x Benetton Dream) were the supreme winners of the 4-year old riding horse stallions class. The pair was already leading convincingly in the warm up phase and they aced the finals as well. Axel Windeler's Don Martillo scored 8.5 for trot, 9.5 for canter, 10 for walk, 8.5 for training, 8 for conformation and got 19 points from the test riders. Former Europpean young rider champion Christin Schütte is now a professional young horse rider and she steered Martina Wahler's Hanoverian stallion Bon Coeur (by Benetton Dream x Sandro Hit) to the reserve champion's title. Bred by Birgit Tietjen, Bon Coeur got 8 for trot, 9 for canter, 8.5 for walk, training and conformation and 18 from the test riders. 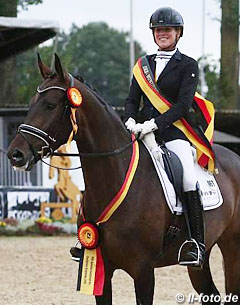 The 4-year old riding horse class for mares and geldings had its field more reshuffled in the finals than in any other riding horse division. The winner of the warm-up round, True Love OLD, could not maintain a lead after the horse did not appear as ridable under the test riders than its own, regular rider. The winner of the finals was Anna-Sophie Fiebelkorn aboard Silke Pelzer's Oldenburg Sisters Act (by Sandro Hit x Royal Diamond). The dark bay mare earned 8.5 for trot and walk, 8 for canter, 8.5 for training and 8 for conformation. The guest judges riders liked her rideability and gave her 19.5 points for rideability and potential. Wibke Hartmann-Stommel and Ann Kathrin Linsenhoff's Oldenburg registered True Love (by Totilas x Florencio) were the reserve champions. The black mare got 9 for trot, 9.5 for canter, 8 for walk, 8.5 for training and 8 for conformation. The guest judge riders gave her 17.5 points.