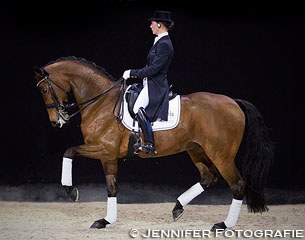 Setting a Belgian record for the highest ever international kur score at an international event, Belgian Grand Prix rider Fanny Verliefden and Annarico posted 78.975% on the board to finish eighth in the musical freestyle at the 2016 CDI-W Amsterdam on 29 - 31 January 2016. Furthermore, the 29-year old is currently the highest ranked Belgian rider on the FEI Riders Ranking, having just lifted to 43rd place, as well as on the Olympic Athletes Ranking, standing in 4th place in group B.

“It was my first at time at the Amsterdam show which actually went very well.  The show is so well organised, nice accommodation, and a beautiful surroundings,” Fanny told Eurodressage. “It's a real pleasure to be able to ride there.”

In her final week of preparation before Amsterdam, Fanny felt that her 11-year old Dutch warmblood mare Annarico (by Lord Loxley x Havel)  improved by the day at home, as well as in her lessons with coach Anky Van Grunsven.

“We grew more and more confident in the exercises. At the last training Annarico really felt great, so we left for the competition with a great feeling," said Verliefden.

At the World Cup qualifier in Amsterdam the pair finished 9th in the Grand Prix with 72.800% and 8th in the Kur with a Belgian record of 78.975%. Fanny was very happy with the control she maintained throughout both tests, although she admits there are still areas to work on. She is proud with her scores and having set a record gives her a very good feeling. It was the first time she had ever ridden this freestyle competition and the Wiekevorst based rider, who trains with life partner Wim Verwimp on a daily basis, really enjoyed every step of the ride.

“It was a pity I made the mistake in the one-tempi changes, as it turned out to be an expensive one. On the other hand it means there is still room for improvement," said the level-headed rider.

Fanny admitted that while it’s every athlete's dream to represent their country at the Olympics, she is working towards qualification, not just for herself, but for Belgium. "All the odds have to be in place to get that qualification," she confessed. "There are three Belgian riders (Devroe, Verwimp, Verliefden) trying to get an Olympic ticket and our scores are fairly close. Therefore, obtaining more than one ticket would be a great thing for Belgium too."

Fanny has planned on competing next at the 2016 CDI Lier on 1 - 6 March 2016 but she is also hoping to get a starting place for the CDI-W Neumunstur in February. She will spend the in between time working on a lot of small details and fine-tuning of the exercises.

“The fun thing about our sport is that it's never perfect and that there is always room for improvement.  We never achieve perfection, should this be the case, our sport would become boring.  That is why we work so hard every day to get the smallest details fixed and the horses better and better," Fanny explained.