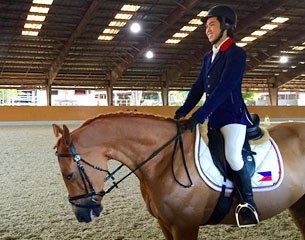 The FEI World Challenge is a global event that includes more than 50 countries divided into nine zones. Two judges are chosen for each zone and they travel to the events where competitors ride the same tests. When the judges conclude their trip through one zone, the results are added together which determine the winner for each class, as well as a team result.

For the New Zealand riders the blustery weather  made  for difficult riding conditions  and unsettled horses, but the judges review at the conclusion of the competition revealed a number of other factors which resulted in lower than usual marks across all levels. The judges noted many horses lacked a steady forward contact  and suppleness  A lack of balance from many horses, lack of impulsion, crookedness and incorrect position and inaccurate test riding saw the average marks lower than previous years. Another factor which appeared to influence the performances  was the requirement for sitting trot at all levels.

2015 is the final year of the World Dressage Challenge as we have known it for 35 years,  but 2016 will bring a new concept which will see the introduction of the Intermediate I test, but will but will not include Preliminary Children or Adults or Elementary Adults.