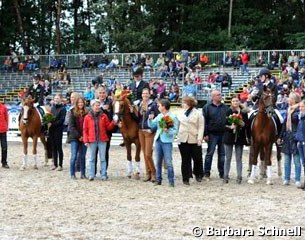 Besides with a special Grand Prix quadrille on Saturday evening 7 September 2013, the 100th anniversary of the German Olympic Equestrian Committee (DOKR) was celebrated with a pony special in the dressage stadium.

Three of Germany's greatest FEI Dressage Ponies in history - Dornik B, Dressman and Konrad - made an appearance in the show ring. All three ponies are retired from international FEI pony competitions but made a short public appearance to honour pony sport.

Dornik B was presented by Esther Stasser, Dressman by Desiree Schurf and Konrad by Semmieke Rothenberger.

The 1991 born Dornik B (Derano Gold x Derbino) is bred and owned by Hans-Georg Bönniger and is a four time Bundeschampion and quadruple European Pony Champion. Under Marion Engelen, he won gold at the 2000 and 2001 European Pony Championships, under Anna von Negri in 2004 and under Louisa Luttgen in 2007. At age 22, Dornik B is still being competed at local shows by Esther Stassen. Dressman I (by Domingo x Niklas I) is 1988 born stallion bred by Heinrich Sondermann and owned by A.T. Schurf. He is a four times Bundeschampion under four different riders (Astrid Buer, Desiree Schurf, Kira Kroncke and Katharina Winkelhues) and double European Pony Champion in 2002 and 2003

Konrad is a 1990 born gelding bred by Hilde Wassmann and owned by Sven Rothenberger. He took five different riders to individual European medals, of which two were individual gold (1997 Nikolas Kroncke, 1998 Kira Kroncke). Konrad also won silver with Annika Fiege in 2002 and under Patricia Hohn he won silver (2003) and bronze (2004). Sanneke Rothenberger won individual silver with him in 2005.

All three ponies with their former riders, trainers and current breeders and owners were offered honoured at the Bundeschampionate.

Check out the video of the Pony Special in the top right corner of this page!