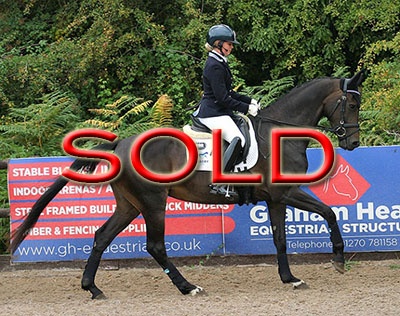 Seagry Danita was a British Hanoverian Premium foal and was graded as a Futurity Elite Premium foal with a score of 9.30. She was the 4th Highest graded horse of any age in 2017. She was an embryo transfer out of BHHS Premium mare Seagry Firstamour and by D’Egalite (son of Don Juan de Hus) who was the Westphalian Licensing Champion 2015. Dannie is a gorgeous dark brown mare approx 16.2 hh. She has a super, uphill conformation. She is the most polite mare, so gentle and willing.  She is a sensitive, forward thinking horse with three very good paces. Her movement is so light and flowing. The feeling she gives is amazing. She has been lightly competed, and has scored an average of 71.6% in her 7 DB outings to date. She is a very trainable mare with a wonderful temperament. She is such a gifted horse and is so willing. Both her young sire and dam are competing at PSG. She has all it takes to go Advanced with the right training. She is sensitive and listens to the rider and quickly learns. She has no known vices. Dannie is the half sister to the 4 year old Seagry Viceroy (Vitalis), an Elite foal and Elite 3 year old, and the 3 year old Seagry Toto Bella (Totilas). She comes from a line of very successful mares and stallions. Dannie is a fertile mare and has given us two embryo transfers which are now 2 years old, both by the stallion Secret and totally gorgeous. She travels well in the lorry and hacks out in company.

Her grandam - Seagry Sanay is a truly outstanding mare that we bought at the Hanoverian Elite auction in 2012. She was a finalist in all 6 British Young Horse classes in 2013 and representing GB was 3rd in the FEI CDI Young Horse Final in Vidauban (France) 2013. In 2014 she was 3rd in the British National Young Horse Championships at Hickstead beating some of Britain's top 6 year old horses. She was nominated to represent GB in the World Breeding Championships in Verden. She was trained and ridden by Charlie Hutton and has competed up to Inter 2. In 2017 she won the PSG at the Hickstead Premier League show.

Her sire, D’ Egalite is by the late Don Juan de Hus and was the 2015 Westphalian licensing Champion. He has passed on a huge amount of his qualities to Dannie. His frame, head, eye and temperament are exactly the same as hers. He is a very successful sire and Small Tour horse in Germany. He has scored well over 70% in each of his last 8 outings.

This is a very special mare, she has been produced very correctly and is bred to win. I really want her to go to the right home where her full potential will be brought out.