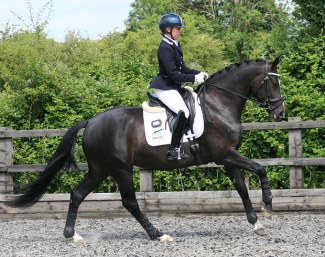 Suzie Seagry was an Oldenburg premium foal and was graded as a Futurity Elite First Premium foal with a score of 9.05. She was an embryo transfer out of St Pr St Seagry Sanay by Tolegro (son of Totilas). She is a gorgeous black mare with a super, uphill conformation. She is compact, powerful and so clever, a very quick learner. She is a forward thinking horse with three very good paces. Her canter in particular is full of jump and reach. The feeling she gives is amazing...you can’t help but smile!! She has been lightly competed and slowly but professionally produced. She is a very clever horse with a wonderful character, she clearly thinks about what is being asked of her, she processes it and then moves on to the next thing.

During the 2021 season she has been competing at Novice level and is scoring between 68% and 75%. She is such a gifted horse and is so willing. She has all it takes to go Advanced with the right training. She is sensitive and listens to the rider and quickly learns. She has no known vices. Suzie is the half sister to Seagry Firstamour who was 6th in the Shearwater Final as a 6 year old and this year she as 8th in the Final as a 7 year old. She was a finalist at the Summer National Championships in 2021 in no fewer than 3 classes. She is currently training at Small Tour.

Her dam St Pr St Seagry Sanay is a truly outstanding mare that we bought at the Hanoverian Elite auction in 2012. She was a finalist in all 6 British Young Horse classes in 2013 and representing GB was 3rd in the FEI CDI Young Horse Final in Vidauban (France) 2013. In 2014 she was 3rd in the British National Young Horse Championships at Hickstead beating some of Britain's top 6 year old horses. She was nominated to represent GB in the World Breeding Championships in Verden. She was trained by Charlie Hutton and has competed up to Inter 2. In 2017 she won the PSG at the Hickstead Premier League show.

Her sire, Tolegro is the first licensed a son from the first crop of the record breaking 2010 Dressage World Champion Totilas and uniquely he comes from the dam line of Negro, the sire of Valegro. This is a potent mix of blood which we are combining with the blue blood of St Pr St Seagry Sanay (Stedinger/Wolkentanz/Hohenstein). Tolegro is competing at Grand Prix. Suzie has many of his qualities and an even better hind leg.

This mare is very special I really want her to go to the right home where her full potential will be brought out.