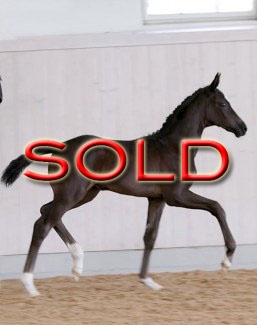 Beauty and brains! With a stellar pedigree featuring both looks and performance this filly has it all! Bon Coeur has fantastic elasticity with powerful but light and airy gaits. He was judged a premium stallion in Verden 2014 and won his 30-day test in Schlieckau in a very strong field, achieving a total of 9.1 points for his gaits. ”Bon Coeur is a spectacular stallion with brilliant gaits. A rideability that makes it easy for the rider to do the job,” said Carl Hester.

The dam Floresca VH (by Floricello), from the famous Västra Hoby broodfarm, comes out of one of Sweden’s most successful damlines nr 31. She is a ***performance mare with a high dressage breeding index, and she is a Premium mare awarded high marks especially for type.

The oldest offspring, Vilas Floridita (by Van Vivaldi) sold at the 2017 SWB Elite Foal Auction. A full brother to Flory De La Coeur, born 2019, got the highest score as a foal 88,9 %, and today as a 2 year old he is recommended to be showed as a a breeding stallion 2022. A half sister born 2020 (by Van Vivaldi) sold at SWB eliteauction to Hyperion Stud USA.

Grand dam First Delight (by First Wish) is a Premium mare receiving top marks at the young horse test. She produced Floresca VH (by Floricello) and Strathisla VH (by Skovens Rafael), both Premium mares. Three generations of Elite mares follow in the pedigree. Great grand dam, the prize winning De la Reinne (by De Niro) has produced many premium- and competition horses, among them Springbank VH (by Skovens Rafael) S class dressage and exported to the USA and two approved stallions; Oban VH (by Floricello) and Springbank II VH (by Skovens Rafael), Champion stallion in Denmark and extremely successful in the young horse championships in both Sweden, Denmark and the World Young Horse Championships.

Rakel VH (by Rohdiamant) follows, she produced the approved stallion Dalwhinnie (by De Niro) with merits in GP dressage as well as having produced many offspring successful in both breeding and in sport. Rakel VH also produced Ricardo VH (by Skovens Rafael) with merits in M/S class dressage and a placing in the Swedish 7-year old championships and Florence VH (by Floricello), the National 3-year old mare champion and Fürstin VH (by Fürstenball), in 2018 she was the top scoring mare in Sweden.

This damline also produced Darcia (by Danone I) that under rider Jeanna Högberg represented Sweden internationally and Hot Cup VH (by Blue Hors Hotline) with merits in three-star international eventing.

The filly is stationed in south of Sweden.